There’s Nothing More Frustrating Than… 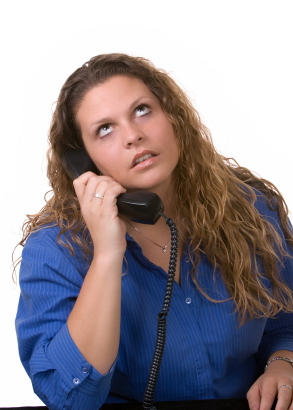 Hey, it’s not an interruption… it’s a paycheck

When you need support on a piece of software, and can’t get in touch with anyone by email or by phone. Especially by phone.

Even my webhosts will take the odd support phone call now and then, and even though I know that I may get a snarky attitude from the support team (save that for another post) I’m willing to put up with a little attitude in exchange for prompt assistance.

But when you can’t contact anyone – that’s bad news. And that’s what happened to me today when a piece of software I installed to run one of my sites went on the fritz.

So, I frantically started looking for another software solution. And guess what? I got the CEO of another company on the phone within five minutes of finding their site online. Now, to some that may just mean that the company is small.

But to me, it tells me they care about their customers and prospects. And that, my friends, makes all the difference in the world.

So, Why Don’t You Answer Your Phones?

With today’s technology, there’s simply no excuse for not answering your phones at your martial arts school all day long. Almost everyone carries a phone in their pocket everywhere they go. Call forwarding allows you to route calls from your school phone to your cell phone, and some VOIP services even allow you to have your calls ring to two phones at once.

So why wouldn’t you answer your phone?

Maybe you think it’s okay to let those calls hit your voice mail during the day. I’ve done it myself. But, one thing I’ve witnessed time and again is that the early bird gets the worm. Whomever the caller talks to first will usually set the appointment.

So if someone like that hits your voice mail box, that’s a customer lost.

The Opportunity Cost of Missed Calls

Opportunity cost is an important concept in economics. Don’t worry about the fancy definition; just understand that every opportunity missed costs you something. The real question is whether what you gained instead worth passing up that opportunity.

In the case of missing phone calls, generally speaking the answer is a big fat NO…

Let’s look at it one way, in the money it cost to generate a single phone call to your school. This can be anywhere from $20 to $100 dollars, depending on how good your advertisement and marketing is, and how much it costs to run it (Note: If you want to drive the cost of advertising down, improve your marketing so the cost per lead is lower – visit http://small-dojo-big-profits.com and http://martialartsmarketingbook.com to find out how).

So, from that perspective, every lost call costs you an average of $60. That hurts, but not so much.

And That’s Just The Tip Of The Iceberg

Unfortunately, that’s not really all you’ve lost. Let’s say that for every ten people you talk to, you set 6 appointments, and out of those five show up. And let’s say four out of those five enroll, and the average student sticks around a year or more. At $150 a month tuition, each student is worth $1,800 minimum.

So, if you’re enrolling 40% of the people you actually get on the phone, each missed call is costing you approximately $720 in lost tuition… or $780 if you add in the cost-per-lead.

That’s an expensive habit, my friend. Makes me want to forward my phones to my cell AND my home.

So, here’s a way you can increase your income dramatically this very month – START ANSWERING YOUR PHONES from 8 AM until 9 PM, and return all phone calls the very same day, and within the hour if possible.

And About That Software Vendor…

Incidentally, they finally got back to me five-and-a-half hours later. Said the problem should be resolved within the hour. That was an hour and 45 minutes ago.

Needless to say, I am going with the other vendor, ASAP.