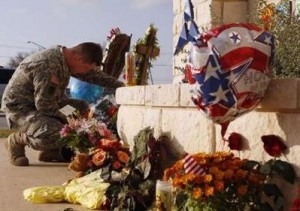 A soldier mourns the victims of the terrorist attack at a makeshift memorial on Ft. Hood, Texas. Photo by Reuters

Last week we had a terrible tragedy here in Texas. A terrorist (he can only be described as that – nothing else will suffice) shot and killed 13 soldiers and civilians on Ft. Hood, Texas and wounded 29 more.

This act was an outrage, that this person who was sworn as a physician to “first do no harm” and as an officer in the United States Army to defend and uphold the Constitution committed this heinous act of murder. I quote:

The Oath of Office (for officers) – “I, _____ , having been appointed an officer in the Army of the United States, as indicated above in the grade of _____ do solemnly swear (or affirm) that I will support and defend the Constitution of the United States against all enemies, foreign or domestic, that I will bear true faith and allegiance to the same; that I take this obligation freely, without any mental reservations or purpose of evasion; and that I will well and faithfully discharge the duties of the office upon which I am about to enter; So help me God.”

This is the oath every officer (and enlistee in similar form) takes upon entering service in the United States Military. “…support and defend the Constitution of the United States against all enemies… So help me God.” I swore that same oath as an enlistee many years ago before I volunteered for active duty during Desert Storm. And, as it turns out I was assigned to the very military installation where this recent tragedy occurred.

I’m not going to lie to you and tell you I loved every minute of my time in the military; on the contrary, there were many days when I asked myself why I volunteered in the first place. But thank God, I didn’t even come close to combat, unlike my friends and others who are serving in Iraq and Afghanistan right now.

During that time, I met some of the most important and personally influential martial artists I’ve trained with, and still remain friends with many of them. And to this day, I remember those times and the people I served with fondly, and I WILL say that no matter how trying some of it may have been at the time, I’m PROUD that I served, and wouldn’t trade my time in the Army for anything.

In light of all this, and on this most sorrowful of Veterans Days, I ask that you allow me tell you briefly about The Life of A Solider:

A soldier enters service knowing that he or she can be called to war at any time. Soldiers don’t choose their wars; they only choose to become soldiers.

A soldier gets up and goes to work long before most people get out of bed, and on many days their work day ends long after most people are sound asleep. A solider stands guard so their countrymen can rest soundly at night.

A soldier sleeps in tents, on the floor, in the back of a transport vehicle, on cargo straps in a plane at 10,000 feet, in the mud, in a bunk or on a rack, sitting up or lying down; their pillow might be their helmet, ruck sack, duffel, spare tire, or the bare ground. They forsake their creature comforts so their folks at home can enjoy theirs in peace.

A soldier misses home, day in and day out; 24/7/365 they long for their wives and husbands, their family, their friends, their loved ones. A soldier’s life is spent away from home so their home will still be there when they return.

A soldier mourns those who have been lost on the field of battle, as well as those who have passed on in times of peace. There is no love like that bond which is created through shared hardship and trials; a soldier remembers those who are no longer with them, and honors their memory by doing their job no matter the personal cost.

A soldier does his or her job. Whether spat on or hugged, whether criticized or praised, whether called hero or names unfair and undeserved… a soldier serves.

Do me a favor today… when you see a soldier, stop and take time to look that person in the eye while you shake his or her hand, and sincerely thank them for their sacrifice.

If You Wish To Support Those Affected By The Ft. Hood Shooting:

Officials at Fort Hood have announced the following opportunities for the public to donate to various agencies on the installation to honor the Soldiers and family members affected by the mass shooting on post last week:

Checks should be made payable to “CTOF” (Chapel’s Tithes and Offerings Fund) with a note on the memo line stating “Nov. 5 Tragedy.”