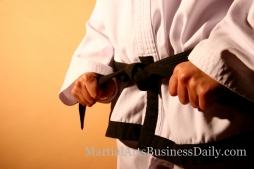 Is a martial arts black belt more than just a piece of cloth to your students?

That rite of passage that marks the entryway from beginner into the ranks of those who are recognized as no longer being novices, but something closer to fully accomplished martial artists.

Now, I’m not about to get into what I think the physical requirements for a Black Belt test should entail; that’s something each school owner needs to figure out on their own, based on their own style and curriculum.

However, what I am going to discuss is making your Black Belt test mean something more than just a workout and a rank promotion – to instead build into your exam a learning and growth experience that will help students expand their awareness of the need for having an interest in and a caring attitude toward others.

The Need for Instilling Interests that Go Beyond Self

With the widespread onset of the fractured family unit, and the proliferation of two-income households where both parents work outside the home, working adults have been ever more hard pressed to effectively parent their children.

According to a 25-year study released in early 2007, we are now seeing the most self-centered generation ever entering colleges and the workplace. Professor Jean Twenge of San Diego State University studied this trend toward self-interest and narcissism during her involvement in that study. In her words, “We need to stop endlessly repeating ‘You’re special’ and having children repeat that back. Kids are self-centered enough already.” (Source:AP article http://www.msnbc.msn.com/id/17349066/)

Without a doubt, there’s a need for instilling the values of community involvement and helping others in younger students. And, it goes without saying that by having adult students participate in kind, we present a value system to our communities that transcends winning tournaments and beating the bloody pulp out of someone in a cage fight.

So, let’s examine a few ways we might implement tried and true methods to make your students’ Black Belt test into a true growth experience.

In my schools we have always required red belts and brown belts to log 50 – 100 “classroom assistant hours” before they can qualify to test for first dan. The purpose is to instill a sense of responsibility in the students. Moreover, it’s their chance to give something back to the school.

My ultimate goal when I have a student doing classroom assistant hours is that they learn how to be invested in the progress of others. And, in light of the aforementioned study, I think you’ll agree that there’s never been a time when the value of servant leadership has been more relevant.

Key to this approach is reminding the student of their role in the school as an advanced student, and emphasizing that they were once in the same shoes as the students they are working with. This helps engender empathy in the candidate, which could be considered a prerequisite to developing more than a purely self-serving interest in the needs and goals of others.

Putting It In Words

Another requirement for my students who are testing for Black Belt is that they write an essay on what Black Belt means to them. I’ve seen this done in many ways in other schools around the country. While this practice may be familiar to you, I’d like to offer a few pointers on helping your students get the most out of the experience.

First and foremost, you should instruct the students to present their essay in their own words. A good way to do this is to ask them to include a particular experience they recall from their journey to this point, and to expound on how that experience helped them become a better person.

Just allowing your students to regurgitate a bunch of platitudes they’ve heard you or other martial artists spout about the Black Belt is not going to serve them at all. Make it clear that you expect them to tell you quite honestly how they benefitted from their training, what they are most proud of, and what, if anything, they might do differently if they could repeat the experience.

By forcing your students to reflect on their life experiences, you are helping them learn to identify, clarify, and verbalize their values. Even with younger (“Jr. Black Belt”) candidates, this sort of exercise can be of great benefit.