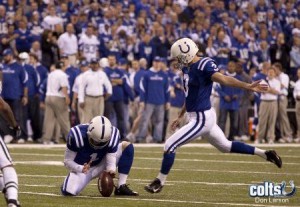 Matt Stover preparing to place another one through the uprights. Photo courtesy Colts.com

So my old buddy Matt Stover is going to the Super Bowl again.

And, he’ll have the distinction of being the oldest NFL player ever to play in a Super Bowl game.

To be truthful, Matt and I haven’t spoken in years.

But, in the off-seasons prior to his 1999 and 2000 seasons with the Ravens, I had the privilege of helping Matt train his off leg for greater balance and increased kicking precision.

Those two seasons were break out seasons for Matt and the Ravens.

I’d like to believe I had a small role in that. Matt thought I did, and said so. I don’t take much credit though – there are a whole slew of professionals who work with pro athletes, and each one does their share to help out.

And, Matt’s the guy who did all the hard work, and the one with the golden leg. :)

But the crazy thing is, I’d have never thought in a million years that I’d have *anything* to do with an NFL player going to the Super Bowl.

And it would have never happened if I’d listened to all the people who told me I was wasting my time with my dream of being a full-time martial arts instructor and school owner.

I thank God that He made me resilient (thank you, God).

And, when I’m watching the Colts play in the Super Bowl this year, I’ll be thinking to myself that I at least had a tiny little part in making that happen.

Have a great weekend, and go live your dreams.

P.S.: Small Dojo Big Profits explains how I did it… in spite of all the people who said I couldn’t. Check it out if you need some guidance or inspiration.