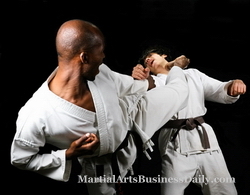 Do you know the three levels of kumite?

“C’mon Jason, let’s do some sparring”, Alex challenged me half seriously in front of a group of other kids.

Having just started karate I didn’t particularly want to spar a cocky young black belt, but at the same time I didn’t want to back down from a challenge either.

After all he said “spar”, not “fight to the death”.

It was 1988 and I was still in high school. It was our school’s annual 11th grade fundraiser event – “the basketball marathon”. Basically it was a 24 hour basketball event where all the 11th grade students stayed overnight in the gym, played ball and raised money for charity. It was during one of our team’s breaks that Alex set the challenge.

I’d just started karate a few months before and despite training 3 nights a week and feeling secure in my basic technique, sparring was a whole new kettle of fish. Sure I could do a solid reverse punch and front kick. Geez, I could even make a nice oi-zuki (or so I believed) but sparring… yikes, that was something different.

I understood that now I’d have to put those basics in motion, but I really hadn’t done it before so I wasn’t really sure what to expect. Plus I had no clue of how my opponent might fight. He was a black belt in a different art (TKD) and probably had a different idea of what the rules should be.

“So you want to spar or not?”, Alex asked again.

“Have a go Jason!”, encouraged another kid, Chris who was also studying TKD.

Of course we weren’t wearing any protective gear, and there was no discussion of rules. I guess I was just supposed to try and hit him and he was going to do the same?

Alex took his side-on stance and was bouncing around with kicks flying in every direction. I stood there rigid in my basic forward stance, front knee bent, hikite pulled back and front hand up. I didn’t know that my sparring stance should be different.

I remember trying to move around and maintain good basic form. I also remember thinking, “Hit him with a lunge punch” and that’s exactly what I tried to do from long range. But of course without any concept of timing, sparring footwork or distance I couldn’t touch him. I was frustrated and embarrassed at how awkward I felt. Meanwhile Alex danced around like Muhammad Ali, floating like a butterfly and stinging like a bee, hitting me at will.

That was my first introduction to sparring… and one that I laugh at now that I have 20 years of hindsight. It’s funny to see my students now in that same boat I was in back then, where their focus is solely on the technique that they’re thinking about doing next. Everything else that is so important to being competent at sparring is completely non-existent.

It’s Stage One of what I now call the Three Levels of Kumite.

Unfortunately when a level one fighter comes up against a level two fighter, they’ll never have a snowflake’s chance in hell of actually scoring a point. The level 2 fighter can see the whole situation and doesn’t have tunnel vision like their opponent – focusing on doing the next technique only.

Level One – Stuck in Conscious Thought

Student understands and can apply –

In my experience students tend to remain at Level One for up to 18 months before they’ve gotten enough experience to let go of their conscious thought and are able to see a fight from an overall perspective. Of course it all depends on how much sparring is done on a regular basis. But with continued practice students will then reach…

An analogy I use to explain this to my students is that of catching a ball.

As an adult you don’t think about it – it’s a learned response, a reflex reaction you developed as a kid. But as a young child you don’t yet possess this skill. The ball just bounces off your head leaving you wondering what just happened.

Over time you learn to concentrate on watching the ball, getting your hands ready and then grasping for it as it comes into range (conscious thought of the action). Many times you’ll miss it because you grasp too early (lack of timing), grasp at the right time but won’t extend your arms far enough (incorrect distance), or the ball will bounce off your arm (lack of correct technique). However, with enough repetition it eventually it becomes your subconscious reflex to catch the ball without thinking (subconscious technique).

It’s the same with sparring – one day you are able to punch, kick, block and move without thinking about it.

This isn’t a stage everyone reaches and it’s one that most people don’t give much consideration. So many fighters reach Level Two and then think that’s all there is to it. You just put on your gear and spar, but the clever fighter realizes there is far more…

Using the above example to summarize the Three Levels of Kumite…

When I first sparred with Alex I was unable to apply any kind of strategy or tactic. I didn’t understand his way of fighting so I didn’t know what might work and what wouldn’t. I didn’t understand my own ability too well either, so again I couldn’t strategize. I didn’t think that because he stood side-on he might be a good candidate for a rear leg roundhouse kick to the kidney.

As a Level Two fighter I’d be aware of this target and if he came into range and it became obviously exposed, I’d make an attempt to hit it, but again this would be a reactive response instead of a proactive one.

But as a Level Three fighter this would be something that I’d consciously think about exploiting during the fight. I’d be wondering how I could set up that target so it was free and clear of his guard. This might mean changing my line of attack (how you stand relative to your opponent) so I was always positioned slightly to his blind side.This would open up the angle of attack for my advantage. Then I’d think about how I could get him to move his arms out of the way. This is an example of strategic thinking. It’s proactive.

Whichever stage you’re currently at, it’s time to start thinking of how to move up to the next level.

To move from Level One to Level Two – Repetition of basics are important, but so is repetition of combination techniques, drills to improve your footwork, timing, distance and blocking reflexes.

To move from Level Two to Level Three – start trying to think one step ahead. Start trying to figure out your opponent’s weaknesses and how you can exploit those weaknesses. Start thinking about how to make them make mistakes. Start thinking about how you can get them to think you’re going to do one thing while you do another! This is the key to becoming a great fighter.

If I only had the understanding and the ability of Level Three all those years ago perhaps Alex’s challenge may have had a different outcome.

About the author: Jason Stanley is the author of “125 Dynamite Drills” and runs a traditional karate school in Lake Elsinore, California.

Questions? Comments? Let us know what you think by commenting below…