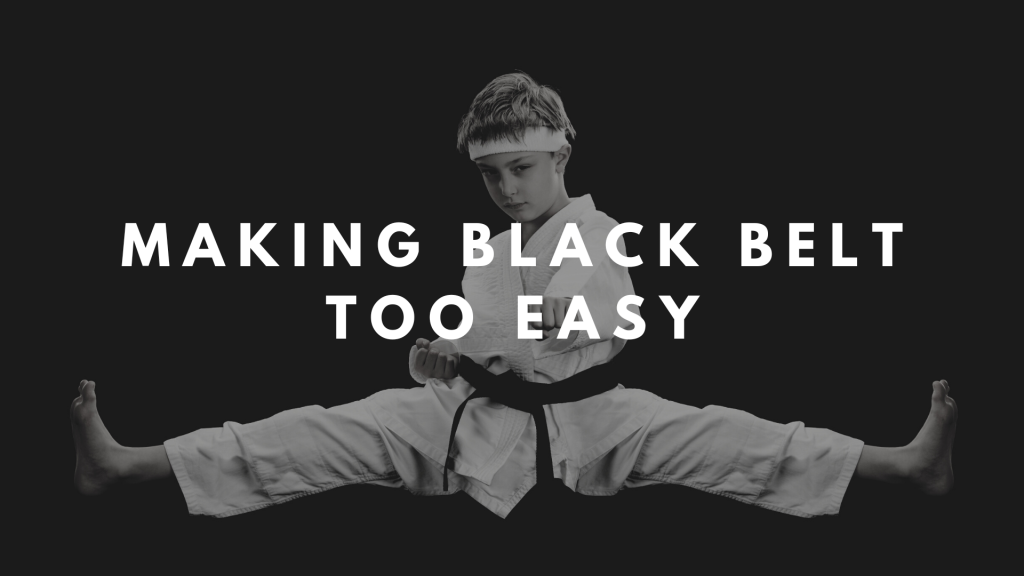 The Dangers of Making Things Too Easy

Are you struggling with balancing retention versus quality in your school? I know I have in the past, and it makes things even harder when you’re worried about paying your bills and making rent each month.

But is there really any need to worry about this issue? For years, “experts” in the mainstream industry have told us that the reason why martial arts schools lose students is because they make things too hard and students don’t feel like they’re progressing.

Well, a funny thing happened on the way to the next century… we started seeing public interest in new trends in the martial arts… namely:

At least based on the information I get from networking with school owners locally and across the nation, interest in these market niches is at an all-time high in our industry.

Yet, you don’t have to do much research to see that adults are flocking to grappling, MMA, and reality-based self defense programs by the droves… I think we can all agree on that.

But Here’s The Funny Thing…

Now, think about this for a second – there’s nothing easy about participating in those types of programs. Moreover, in arts that exist within these niches, rank is a secondary consideration to training and learning… exactly the way it should be in every martial art.

Case in point – Brazilian Jiu-Jitsu. Sure, every once in a while you hear about a phenom getting their black belt in three or four years. But those are extremely rare cases. For the most part, it takes the average student as long to get their first belt in BJJ as it does to get a black belt in the average tae kwon do school (not in my school, but we’re not the norm, either).

What gives? For more than 20 years, hasn’t the mainstream industry encouraged martial arts school owners to make the “black belt” the beat-all end-all goal in your school, in order to increase retention and to encourage students to stick around for the long haul?

If that’s the case, why is it that BJJ schools are seeing record enrollment numbers and interest among that most elusive of markets – the adult segment?

And, lest you blame this all on the UFC craze, let me draw your attention to all the Israeli martial arts schools and reality-based MMA and JKD schools that are doing extremely well in this economy. Once again, rank is secondary to training in those programs.

There Must Be An Explanation For This

Oh there is, believe me. You see, we are living in an information age, a time when the average person can go to Google and research anything they want… when anyone can go online and in just a few keystrokes find out what other people think about anything and everything.

The exchange of information is tremendous… and this has led to a consumer who is more educated than ever before.

That includes public opinion about which martial arts are best for self-defense, for children, for women… you get the picture. And, the result of 26 years of commercial karate and tae kwon do schools handing out belts like candy has resulted in a public perception that they are just for kids.

So How Did We Get Here?

Folks, it’s no coincidence that I’m writing this article just before the major motion picture release of The Karate Kid remake. Certainly, this movie will spark interest in traditional martial arts training among young people (or maybe just kung fu schools – who knows?)

However, the question we need to be asking ourselves is whether we want to continue to make the same mistakes that were made in our industry over the last three decades. You know… following the tremendous influx of children that entered martial arts schools after the release of The Karate Kid in 1984.

Money makes people in our industry do some stupid things, not the least of which is watering down a martial art for mass consumption in pursuit of profit.

So, How Do We Fix This Negative Perception?

However, I am suggesting that we place the emphasis in our schools on training and learning, instead of little pieces of cloth that don’t mean much without the skill to back them up.

And, let the public know that your school focuses on training, not selling belts (click here to find out how). At the very least, maybe we can educate the public about how to know the difference between a “black belt factory” and a serious martial arts school.

Do you agree? Disagree?