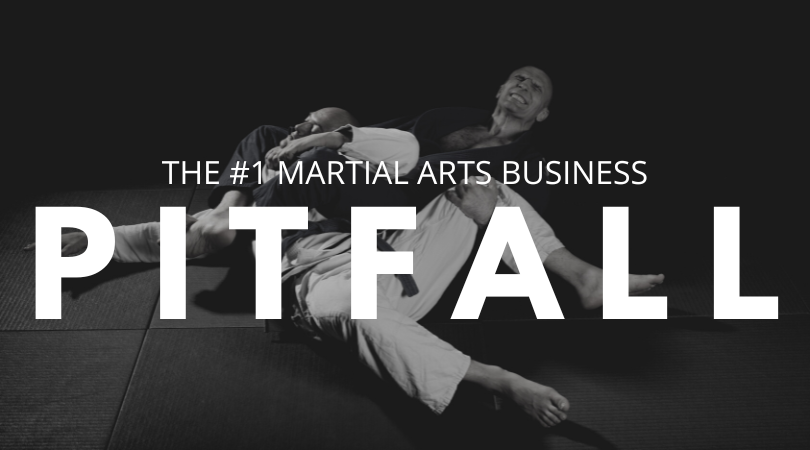 And The Most Common Martial Arts Business Pitfall Is…

How is it that intelligent, talented martial arts business owners often fail so miserably in building wildly profitable schools?

One word describes the most common culprit, and that’s “pride.”

Or even worse, their eyes just glaze over – at which point I know they are entirely hopeless. I’m quick to “fire” these sorts of coaching clients these days, because I refuse to waste my time on someone who isn’t willing to be teachable.

Why? Their success becomes a reflection of my success as a business coach. If a person refuses to be helped, I’m not risking my reputation no matter how much they pay me.

What A “Secret Millionaire” Says About Pride And Success

Lately, I’ve been listening to Dani Johnson a lot. Dani is a well-known motivational speaker and life coach who bases her approach on a single premise:

“The only indicator of success is results.”

Huh. Maybe that’s why she’s been so successful in her career, going from being dead broke and homeless to being one of the featured millionaires on the upcoming television reality show, “Secret Millionaire.”

She tells a story of being a young entrepreneur at a company meeting. The people at this meeting were brainstorming ideas in order to increase their group’s sales.

She, being inexperienced, had no results and therefore no real wisdom to contribute to the meeting. Nonetheless, in an effort to fit in and be noticed, she chimed in with an idea.

Now, I know what you’re expecting to hear – that her idea was well-accepted and she was immediately recognized as a girl genius and up and coming star in her company.

Only in the movies, people.

At Some Point, It’s Time To Just Shut Up And Learn Something

The man leading the meeting was an extremely successful multi-millionaire. After Dani spoke up, he looked her in the eye, and said:

“You are so stupid!”

Now, at this point most martial arts instructors would have either:

a) Punched or slapped a choke on the guy –

c) Or, proceed to defend their idea to the bitter end, even if they had no real-world results or wisdom to back it up.

But to Dani’s credit, she sat there and listened.

“You know what your problem is? You’re just like 98% of the people out there – too interested in showing everyone else how much you know to shut up and learn from people like me who actually know how to be successful. That’s why you’re where you are right now, and why I’m a millionaire.”

Was she humiliated? Sure.

But she credits that moment as a turning point in her life. That, she says, is the moment when she stopped trying to impress other people and instead started finding other people who had real life results. And it’s when she decided to shut up and learn from them…

But it doesn’t stop there. She also determined to apply what they told her, exactly.

Within two years she became a six-figure earner in her company. Today, she’s a multi-millionaire, and independently wealthy.

Huh; I guess humility is worth more than just lip service in a mat-chat at the end of your kid’s classes, after all…

A Pandemic of Pride

I come across people in our industry all the time who could stand to just shut up and learn something. But, they’re too busy trying to show everyone how smart they are, how much they already know, and how much better they are at “X” than everyone else.

And, like Dani was before that day, they’re stuck where they are, doing the same things they’ve always done, and getting no where in their business.

Most often, these folks have never started or built a successful school. They’re the ones on forums, social media sites, and discussion groups who are giving advice to everyone else on how to grow their schools.

All while they’re teaching single-digit classes in part-time locations one or two nights a week.

Now, I’m not the most successful person in the martial arts industry by a long shot. But, I do know how to take someone from nothing to 200 students – fast. I’ve done it myself, and I can show others my “Small Dojo Big Profits” system for how to do it as well.

So long as they are teachable.

But, there are still skills I lack that I want to learn. That’s why even coaches should have coaches, to take you to the next level.

I’m not too proud to succeed (I’ve found pride to be a luxury I cannot afford). So, I’ll shut up and learn from anyone I can. That’s how I got the skills I have now, and how I continue to grow and evolve.

Be honest… have you been too proud to succeed?

Are you your own worst enemy?

Are you sabotaging your own success by refusing to be teachable?

Well then, are you willing to stuff your own pride and learn something that can take you to the next level in your business?

If the answer to that last question is “YES!” then you’ll want to check out MAbizU.com.

Testimonials for Martial Arts Business U:

“Thanks Michael for your help! Seriously I have invested a ton a money years back with continued education from other martial arts marketing ‘gurus’ and it was just a mess of ideas but no clear plan of action or system involved. Your info is well put together and the FB page is a goldmine in itself. Thanks again!”

“Hi Mike, I registered for MABizU on Monday. I wanted to tell you that MABizU is really great and exactly what I needed. Having read SDBP, your Marketing Book, your Sales Book and everything you published via Amazon I’m following your advice quite for a while. But I feel that this simple, step by step guide is exactly what I needed! Thank you.”

“I have to thank you. All this started when a buddy suggested a rotating curriculum and described it to me. I thought the idea was genius and started reading about it. Two days later I found MA bis daily and found your article on it. From that point on, I’ve been implementing as much as possible from your books. Can’t say I’ve been 100% perfect on everything…but damn, even at 75%…I’ve seen great results.”