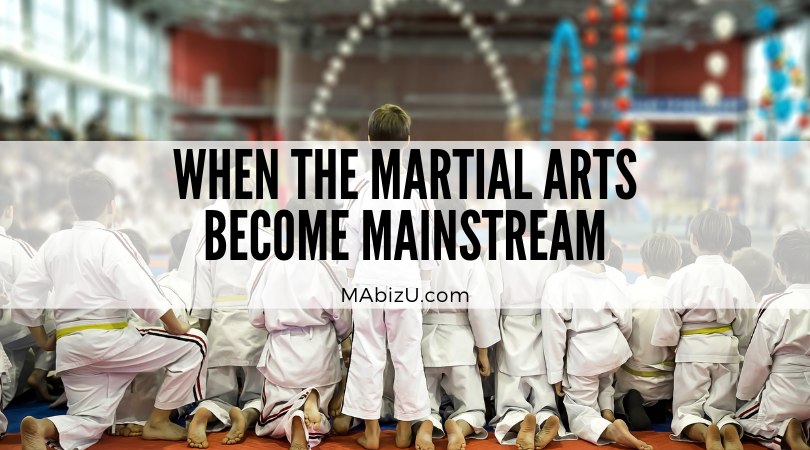 When Your Market Is Small, You Had Better Understand What Makes Them Tick…

The fact is, the practice of martial arts is not a mainstream practice.

At most, the market reach for the typical martial arts school is roughly between 1 and 3 percent of their local population.

And despite the fact that MMA has achieved a huge fan following amongst the mainstream, the actual practice of MMA still remains within the boundaries of these numbers.

Why Mainstreaming Only Serves To Alienate Our Market

Yet, many martial art school owners seem to want to “mainstream” their martial arts programs in an effort to increase their enrollments. Typically, this involves taking out certain elements of “traditional” martial arts practice that are often deemed to be off-putting to the mainstream market.

Unfortunately, this nearly always yields a net negative result for their studios, because by “mainstreaming” their programs, they are in fact removing those positive elements that attract our admittedly narrow market in the first place.

Let me make something clear – I am not referring to the self-defense market here. People who want self-defense training more often than not do not fall into the same category as those seeking martial arts instruction.

While many instructors may disagree with this statement, I have found this to be the rule rather than the exception over two decades of teaching both martial arts and self-defense classes.

Instead, I am referring to the market that includes:

In each of the above instances, we need to examine the reasons why the prospective student is seeking out martial arts instruction versus some other activity. In the case of someone seeking recreation, why are they not taking dance lessons, or joining a bowling league, or taking up golf?

In the case of the parent enrolling a child, why are they choosing martial arts instead of soccer, dance, gymnastics, cheerleading, hockey, tennis, or some other team or individual sports activity?

And in the case of the person seeking martial arts instruction as a fitness activity, why aren’t they joining a gym or seeking the services of a personal trainer?

What Really Makes Your Market Tick

In addition, ours is a culture that, for better or for worse, is greatly based on martial values. This value system is, by its very nature, based on a pragmatic power structure of the type necessary to any martial culture or organization. Just as an army is led by a chain of command, thus our studios follow a similar rank and file system or organizational power structure.

Yet, it is greatly an egalitarian system. Anyone can walk into a martial arts school and, based on their own hard work and dedication, move up through the ranks and achieve status and merit within the power structure.

These unique cultural aspects appeal to our market on an almost molecular level, for three very important reasons:

Now, based on what I’ve pointed out in the preceding paragraphs, what do you think happens when you take out the elements of training from your traditional programs that make them unique to our culture?

That’s right – you take out the very thing that attracts our market to us in the first place.

Granted, our market may not be very big when compared to other “sports”. But, it’s a market that tends to produce fans for life. And that, my friends, is the real key to creating long-term business success for any martial arts studio owner.