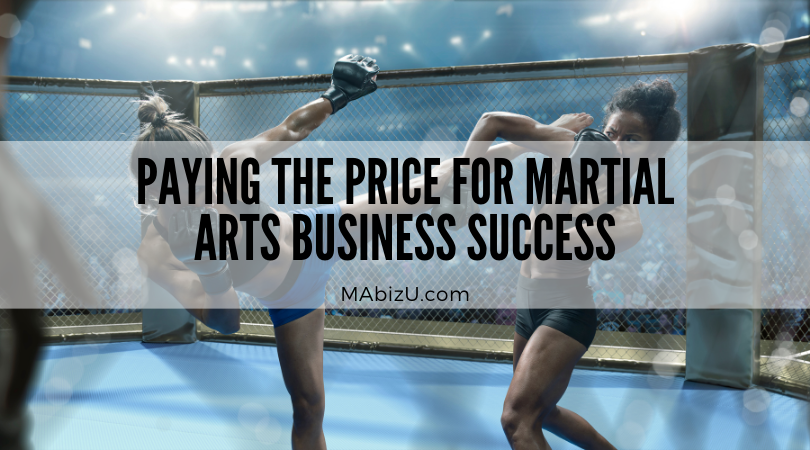 Martial Arts Business Success… Is The Cost Too High For You?

When it comes to success in the business of running a martial art studio, it has been my observation that many would-be studio owners greatly underestimate the sacrifice needed to be successful.

Granted, you can still start a martial art school with almost no capital and poor credit by following the system I detail in Small Dojo Big Profits. That system is universal and the business principles I’ve based a twenty year career on remain relevant because they transcend time and economic circumstance. In fact, the worse the economy gets, the more relevant Small Dojo Big Profits becomes.

But I digress… what I really want to talk to you about today is the internal price you have to pay for starting and running your own successful martial art school.

The Price for Success is Often Measured in Personal Sacrifice

Not the price in dollars, but the price in personal sacrifice. And, the reason I bring this up is because all too often over the last few years I have coached people who weren’t willing to pay the price. This is a monumental waste, not just because my martial arts consulting services do not come cheap, but mostly because every one of these people had it in them to be a real success in business.

So why is it that they weren’t willing to pay the price?

Here’s what it comes down to; often, the internal cost of reaching your business goals is much harder to pay than the external cost. Think about the fact that there are people lining up to buy fast food franchises that typically cost in excess of $150,000 to open. Most of these people will make between $40,000 and $80,000 a year if their business succeeds. Basically, they are buying a job.

Those With an Aversion to Risk Need Not Apply

So why do they do it? Because they are buying the illusion of freedom and security. When you buy into a franchise (whether it’s in fast food or martial arts, it doesn’t matter), you are really purchasing peace of mind (or the illusion thereof). Supposedly, the franchisor has already gone through the process of creating a “foolproof” system, working out all the little kinks and creating a “system” that you can just plug and play to start a business.

Those of us who have been involved with franchises in the past know this is baloney; no matter how good the business system, there’s always going to be risk associated with starting a business. But for the average risk-averse individual who wants to own a business, it is enough to make it psychologically worth the franchise fees and royalties that are paid to own the franchise.

And, this aversion to psychological risk and sacrifice is at the heart of what I’m referring to when I say that the price of starting and running a successful martial art school is often too high for the average person to pay.

For starters, there’s the psychological price of living under the constant worry of failing. This is a big one and often crushes people who lack an entrepreneurial mind. If you have an employee mindset and think you can just show up to your studio, teach, and then go home and leave your work at the studio, do not even think about running your own school.

Once you own a business, it is a constant presence in your life. Everything you do revolves around that business. You might think there’s greater freedom in “being your own boss”, but in fact your business runs you for at least the first few years after start-up. Your business dictates when you go on vacation, what hours you will work, how you conduct yourself after hours (people are always watching), and even what sort of friends you keep (because you may not have time for a social life for a few years).

Want to Succeed? Be Prepared for a Life Overhaul

See, opening a business and ensuring that it is a success often requires a restructuring of every single aspect of your life. You may have to give up things in your life you dearly love, at least for a few years… but in some cases those things will have to go by the wayside forever. Here are just a few examples:

Really, this is just scratching the surface with regards to how much you need to be willing to change and grow if you truly want to become a successful martial art school owner. Those who have done it know that the personal sacrifice you will have to go through can’t be summed up in a 1,200 word article.

However, I think every single successful studio owner I have known will tell you that the journey is where the real reward is found. That process of refining yourself through trials, sacrifice, and hardship and the person you will become at the end is really the best part of starting and running a successful martial art school.