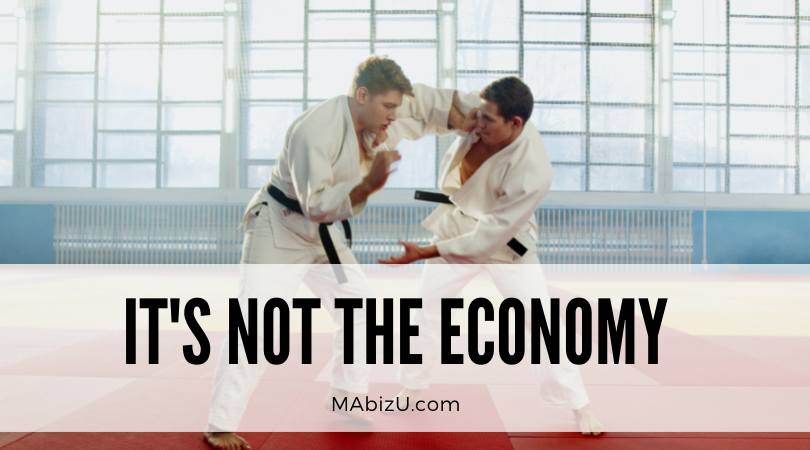 Is It Really The Economy? Maybe, But Tell Me If This Sounds Familiar…

Tell me if this sounds familiar…

A new martial art school owner, or maybe even an established school owner, who is enjoying a modest degree of success. Not over-the-top, massive success, but at least most of their classes are full and their bills are getting paid on time each month.

Then, they get a little too sure of their situation – just a little too comfortable. They decide it’s okay to coast for a while. They stop marketing consistently, thinking, “I’ve got all the students I need right now; I’ll start marketing in a few months and just spend that money on something else right now.”

So their monthly marketing plan becomes a sometimes marketing plan. Besides, it’s more important to have new flat screen TVs and the latest iPhone than it is to market, right?

And, maybe they get a little slow in following up on leads. Same day follow-up becomes next day, becomes “when I can get to it.” Then they decide that they’re tired of teaching all those classes, so they put a young inexperienced black belt in charge of teaching a few classes (usually beginners – the worst class to replace yourself in, by the way). Before long, they have their first and second dans teaching all their classes.

Then they decide that they don’t need to do all those public appearances. It’s a lot of extra work, right? So, they start turning down requests to appear for demos, school talks, and free self-defense classes. And, with all that free time, they start getting a lot of golf time in.

Sounds good, right? Not so much, because all the while their competition is doing all the things they’re not.

But when this school closes down, I can guarantee you that the school owner will say, “It was the economy.”

The Symptoms of a Silent Killer

Don’t be this person! Look, I know the economy is lagging, but that’s the least of your problems if you’re showing symptoms of the same disease that our imaginary school owner above has. That disease, by the way, is COMPLACENCY. Sitting on your plump rump syndrome. Thumbs parked up your posterior evacuation route-itis. Reclining on your pie-hole shovels. Being not proactive, or even reactive, but non-active. Choosing idleness over productivity.

And it is absolutely a deadly and vicious killer of small businesses everywhere. Oh, and it’s easy to fall into; believe me, I know this well. Those of you who follow this blog and have read my other materials know that I’ve chronicled my own experiences with becoming complacent before.

Complacency is a certain killer in its advanced stages. Some of you are cringing right now, I know, because you see yourself slipping in some of these areas. Heck, I’m even thinking right now that I’ve been lax in following up on leads lately.

And that’s why this thing called being complacent is such a silent and deadly killer of small businesses. It creeps up on you, ever so slowly, wrapping its hooks into you like an ivy creeping up the walls of an old church. And unless it’s regularly pruned, trimmed, and tamed, it’ll eventually take over.

Successful Business Owners Do This to Squash Complacency

There is just one thing you need to do to squash complacency for good in your business, and it is oh-so-simple. That is, you need a DMO; a Daily Method of Operation.

I was actually reminded of this just the other day while reading a blog post written by small business owner from another industry. She works from home, and has found that she has to have a DMO to follow in order to be effective in her business. So, she has a list that she follows every single day, and credits that little list of daily tasks and goals with saving her business.

Your business is no different. There are essential daily tasks that you must do in order of priority every single day so that you can remain productive. Being busy is not being productive; “being productive” means just one thing, and that is hitting the constantly shifting target of generating adequate revenue to cover costs and making sufficient take-home profit to make it feasible to stay in business.

Anything less is simply not productivity when you are a small business owner. We do not measure our productiveness by how many stacks of paper we move from pile “A” to pile “B”. On the contrary, we only measure productiveness in terms of profit.

So, in order to create your DMO list, you must first determine which daily tasks are essential to keeping your doors open. Then, you must determine the order of priority for those tasks, while also determining the ideal time at which to do them. Then, you’ll know what your Daily Method of Operation must be to keep you ahead of the killer known as complacency.

Of course, you also have to actually follow your DMO list each day. Just having it isn’t good enough; it’s like knowing all kinds of fighting techniques, but never practicing them. Those skills degrade, so you have to practice them if you want to survive should you ever have to use them.

Well, in business every day is a battle. Rest on your laurels from the fight you won yesterday, and you will have your rump handed to you today. But on the other hand, I bet your competitors don’t have a DMO, because they’re probably winging it too.

So, what’s going to be first on your DMO list today?