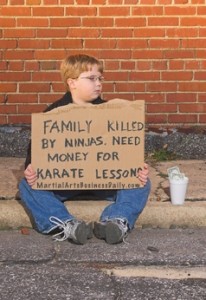 In “The Pursuit of Happyness”, Will Smith plays Christopher Gardner, a big dreamer who is down and out due to an investment in a medical device company that doesn’t pan out.

Throughout the story, Mr. Gardner experiences a great deal of hardship (a gross understatement, in case you haven’t read the book or seen the movie), raising a child as a single dad while fighting for a stock broker position – and a chance at changing his own and his son’s lives for the better.

The central theme of the movie is that people and relationships are far more important than money and success.

Yet, Gardner gives up neither his dreams nor his values during the course of the story. Instead, he pursues his dreams because he wants to give his child a better life.

In other words, he perseveres and succeeds because he has a higher and more noble purpose.

Why Success Has Nothing to Do With Happiness

So, what does this have to do with the business of martial arts?

Hang on, I’m getting to it.

In it, he explains how early in his career he spent tons of money on cars, houses, clothes, and all the trappings of success, yet it all left him feeling no more fulfilled about his work than he did when he first started.

“Just a little more.” – John D. Rockefeller’s reply when asked how much money it takes to make a person happy.

So, he started volunteering in a soup kitchen, and the experience subsequently changed his life.

McKinney now lives modestly yet comfortably in a house that’s a fraction of the size of the mega-mansions he builds, offices in a tree house, drives a Yugo (I had no idea any were still running), and runs a foundation that provides housing to poor people in countries around the globe (including the United States).

Frank funds his charity’s operations from the proceeds of his real estate development, and now also from the sales of his books. And, he says he’s happier now than he ever was before.

The Real “Secret” – Find Contentment First, And Success Will Be All The Sweeter

I know… you’re still wondering if this has something to do with martial arts business.

Hold on, I’m not quite there yet… just one more story before I elaborate on my original intentions with this post.

Just before lunch, I called to check in with my wife, and she shared the following with me:

This guy went from a six-figure income to making $10 an hour as a barista at Starbucks. Now, he says he couldn’t be happier.

Certainly, his book and subsequent movie deal have resulted in a second reversal of fortune for Mr. Gill… yet, he wrote How Starbucks Saved My Life during a time when he was still making $10 an hour.

So what does this all have to do with the business of running a martial arts school?

Many of the martial arts instructors that read my materials and follow the Small Dojo Big Profits martial arts business plan do so because they are not interested in pursuing the “big school dream”, as John Graden once so aptly termed it. And, these instructors invariably find happiness and contentment in running small, profitable schools of 150-200 students.

Yet, I still hear from other equally successful instructors who have become disillusioned with their level of success. Many times, these instructors tell me they are unhappy with their achievements, as they haven’t been able to “reach their goals”.

When I delve a little deeper, I find that their goal is something along the lines of owning a 10,000 square foot mega-school with 1,000+ students enrolled. Not that I think it’s wrong to run a large school – more power to you if that floats your boat.

Don’t Buy Into Someone Else’s Definition of Success

What kills me though, is that these instructors think they’re not successful unless they are running Wal-Mart sized mega-schools in busy strip malls, where the monthly rent could pay the mortgage on Brangelina’s latest digs (which is an extremely risky venture in this economy, to be sure).

Never mind that these same folks who are disappointed with their achievements often have thriving, profitable, vibrant schools with student enrollments in the 150 – 200 student range. And, please ignore the fact that they are already providing a meaningful service to hundreds of students a year, and are making a real positive impact on the lives of those families they serve.

No, never mind all that, because they are all too wrapped up in the pursuit of unhappiness, chasing a manufactured ideal of what it means to be a success in the martial arts industry.

And, it’s a crying shame… that so many martial arts school owners are working themselves sick, trading time with their families for hours at the dojo, all in the name of pursuing some illusion of success that will likely be a hollow victory, should they ever achieve it.

If You Want to Be Happy, Define Your Own Measure of Success

My advice to these folks is invariably two-fold:

The bottom line is, you will be happiest when you determine your own measure of success, and pursue goals that are in harmony with those values.

If you want to derive the most satisfaction from your career as an instructor, decide right now what sort of school and lifestyle you want to have, and what sort of impact you want to make on your students and community, and pursue that first.

I can assure you that once you do, all the rest will follow.

Want to find out how to run a martial arts school where the focus is on helping people, and still make a great living? Go pick up a copy of Small Dojo Big Profits and discover how to master the pursuit of happiness in your martial arts school.