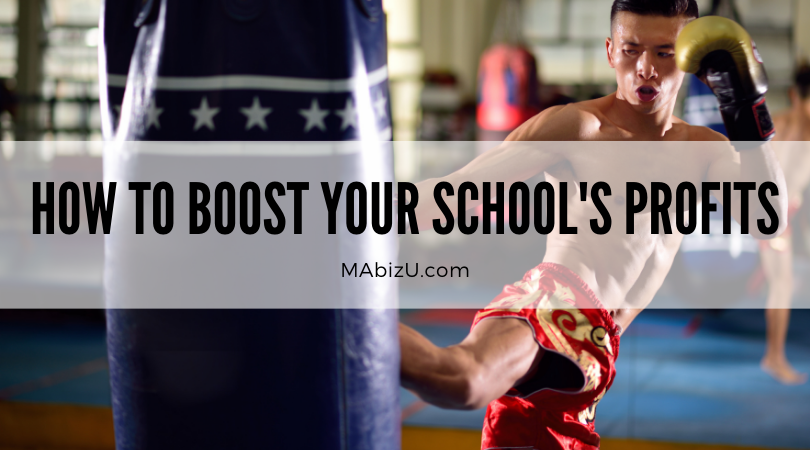 I’ll cut right to the chase today; a lot of you are struggling needlessly in your schools. And when I say “struggle”, I mean financially.

Now, let me clarify this statement so you understand who I’m speaking to in this article:

It’s that third bracket that I’m speaking to in this article, although those of you who are in the early growth stages will definitely benefit from reading this as well. After coaching you guys and gals for almost two decades, I know you very well. Heck, I’m one of you, I’ve lived every struggle you’re going through, and I also know why you’re struggling because I’ve been where you are now.

And I can tell you with a certainty, if you’re running a school with 100 students or more and you’re struggling financially it’s likely because you’re leaving a lot of money on the table every month. In other words, you don’t know how to maximize the profits from your business.

Are You Struggling Needlessly?

I’ll say it again; the one thing I know for sure about martial arts school owners is that a lot of you struggle unnecessarily, and it’s simply due to a lack of knowledge…

Specifically, knowledge of how to apply what I call the “Profit-Boosting Principles” in your business. These principles have been around since the first entrepreneur started a business, and they’ve been discussed at length in many business books. In fact, I learned these same business principles when I studied business in college, although I was first introduced to them by reading Jay Abraham’s books.

I’m sure you’ve heard these before, but let me list them for those of you who may not be familiar with what I’m referring to:

Simple, and obvious to those who have run businesses for any length of time. In fact, when I first saw these principles I had already been running a successful business for years. It was then I realized that I had already learned to apply them out of necessity in my own school.

(Note: I would argue that there exists a fourth principle, “lower your overhead”, a topic I cover extensively in SDBP. However, for the sake of today’s discussion we’ll stick to these three.) 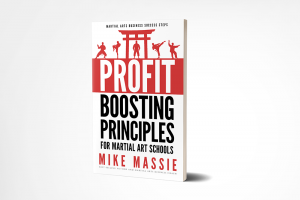 It’s The Obvious That Often Gets Overlooked and Ignored

Yet, despite the obviousness of the above-mentioned principles few school owners ever learn how to apply them in their martial arts business. And, even those who do attempt to apply them typically only focus on the first principle, because it seems to be the one that is the easiest to do. However, it’s only when you apply all three principles effectively and in concert that you will be able to maximize your profits in your martial arts school.

As I said, I learned how to apply the Profit-Boosting Principles to martial arts business management long before I ever had these principles described to me in any organized fashion. All I knew was that I wanted to be a successful studio owner, so I came up with ways to do exactly that. Some methods I learned from asking questions, some I learned from watching what successful studio owners did, and some I came up with on my own.

Regardless, what I ended up with after a lot of trial and a little error was an entire system for maximizing martial arts school profits in a Small Dojo Big Profits studio. Some of this information ended up in Small Dojo Big Profits, but a lot of it was left out since the focus of that book at the time I wrote it was on starting a martial arts school with minimal cash and zero credit. And, in all honesty I held some of it back because quite frankly I didn’t want to give new and prospective school owners too much to worry about when starting a martial arts school.

Yet, after coaching martial artists through the process of starting martial arts schools for over a decade, what I’ve determined is that what seemed obvious to me at the time I started my first school is not always so obvious to others. Maybe I just have a knack for making money, or maybe I just stumbled across a winning approach (more likely it’s a combination of the two); regardless, I have realized that a lot of school owners never come to understand the big picture when it comes to enjoying the financial rewards that martial arts school ownership can provide.

The Secret That’s Been Kept Behind Closed Doors

Another reason for this is that martial artists tend to keep their best stuff to themselves. Granted, if you know someone who is a successful school owner and they really like you, they might take you aside and share some of this stuff with you. But for the most part, a lot of this knowledge is kept hidden from the majority of school owners, because the most successful instructors don’t want their competition to find out what they’re doing.

If you join an expensive business coaching program, you might get this information. And, I emphasize the “might” part; that’s because, quite frankly, a lot of the people who are charging a lot of you a lot of money for martial arts business coaching don’t know this stuff! Oh, they might know bits and pieces here and there, but they don’t really know how it all goes together… and that’s the real secret that’s been kept behind closed doors.

As those of you who read this blog faithfully know, I’ve made it a personal goal for the next year to organize and disseminate all the business systems I developed in my own schools that helped me succeed as a school owner. That’s why I’ve decided to organize and publish my systemized approach to boosting the profits in any martial arts school. 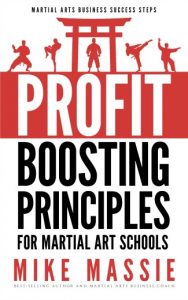 Previously, I’ve released portions of this material piecemeal to my private coaching clients and on my private coaching websites and forums. However, for the first time I’ve gathered together the entirety of the material I’ve published that applies directly to using The Profit-Boosting Principles in a martial arts studio.

Now I’m releasing them all in my new book, The Profit-Boosting Principles: How to Dramatically Increase Your Martial Arts School Profits Without Increasing Your Overhead (Martial Arts Business Success Steps)

(Update 11/2021: You can now order the book in both paperback and ebook formats directly from my site by clicking the links above.)

If you’ve ever wondered how your friends who also operate martial arts schools seem to do so well financially, even though they have the same amount of students you do, you’ll want to read this book and apply this system immediately in your own martial arts school.

(Note: I wrote this article—and the book—in 2012. It’s just as applicable today as it was a decade ago. ~MM)