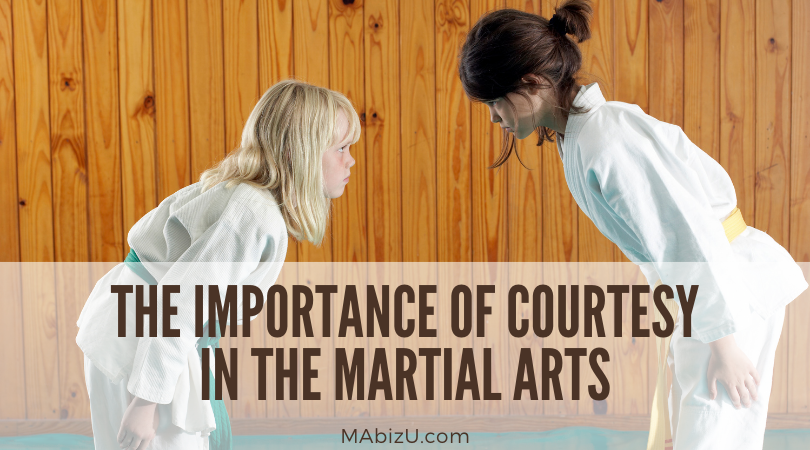 Do you teach courtesy in your martial arts school? Does it go beyond bowing at the beginning and end of class? And do you model courtesy as a character value to your students?

Regardless of your answers to these questions, I would encourage you to reexamine how and how often you emphasize courtesy in your martial arts curriculum.

I also believe that we as martial arts instructors are in a unique position to have a positive effect on society at large by teaching courtesy to our students. And most importantly, I think it’s just the right thing to do.

Let’s set aside for a minute the fact that teaching martial arts character values is a great retention strategy for your business. And for the sake of this discussion, forget the fact that martial arts schools that have a strong character development program tend to be more financially successful and have higher retention numbers in their children’s classes. Instead, let’s look at this issue of teaching courtesy merely from the perspective of doing the right thing for its own sake.

I don’t want to get all preachy on you, but I do feel it’s important to share the gravity of this topic so you don’t merely shrug it off. Common courtesy and politeness are really the social glue that holds a civilized society together. And, I would argue that (outside of religious institutions) martial arts studios are one of the few places where these values are consistently taught to children and young adults today.

The Decline of Courtesy as a Social Value

I believe all these factors have potentially contributed to the recent decline of courtesy as a value in our society. And, I’m sure sociologists will have plenty of places to put the blame when they look back in fifty years.

The fact is, in modern society less and less emphasis is being placed on the sanctity and value of preserving and respecting the human dignity of others. The potential consequences could be dire if we as a society fail to reverse this trend.

When Societies Fail to Value Courtesy

History teaches us that when a society loses the ability or willingness to value human dignity, it will eventually lose its willingness to protect the sanctity of human life as well. I could go into all sorts of spiritual and psychological reasons why this is true, but for the sake of this conversation it suffices to merely point this out as a historical lesson demonstrated through various atrocities committed by past cultures and nations.

Think about it; when kids kill other kids, where does that lack of restraint come from? The simple answer is that it comes from losing the ability or never learning to value the sanctity of life. (And when you have time, check out Lt. Col. Dave Grossman’s book On Killing for more on this.)

While some would argue that sociopathy is a mental disorder, many who have worked in the military, law enforcement, and the criminal justice system will readily tell you sociopaths are made, not born. I would argue that (at least in some cases) we martial arts instructors are in a unique position to prevent this from occurring by instilling positive social and character values in our students at an early age.

The results of this relate to just about everything we do and teach in the martial arts. We teach character values in order to build confidence in children; yet, they’re faced with bullying and teasing everyday at school. We teach self-defense so people can protect themselves, yet even a minor disagreement can potentially end in a violent altercation with the short fuses and greater propensity for violence folks seem to have these days. And, we teach respect for others, but our current popular media seems to be focused on disrespecting others as a form of crude (yet popular) entertainment.

Modeling courtesy merely means that you strive to treat others with dignity and that you show restraint in your personal interactions. “Do as I say, not as I do” never goes over well with children. However, they respect adults who walk their talk. So, walk the talk when it comes to teaching courtesy.

Defining it in terms that children can understand is important when teaching courtesy to your youngest students. Remember that younger children lack the ability to see situations from the perspectives of others. So, when teaching young children it may be more effective to frame mat chats and character lesson talks in a way that relates the consequences of lacking courtesy and the benefits of displaying courtesy in a personal context.

Providing ample opportunity to practice courtesy is even more important than teaching what it is and why we need to use it. By practicing courtesy, children are provided with experiences that allow them to feel the positive emotions that accompany being respected and respecting others. This will help them anchor the character lessons you teach to positive memories during the learning experiences you provide.

If you’d like more information on how to teach character values in your martial arts school, you can find it in my book, Martial Arts Character Lesson Plans for Children. But you don’t have to read my book to implement the simple three-step approach to teaching courtesy in your school that I’ve just described. And at the risk of sounding cliché, I want you to know that by doing so you will ultimately be helping to make the world a better place.