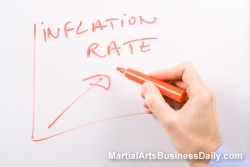 When was the last time you raised your martial arts tuition rates?

According to the U.S. Department of Labor’s Bureau of Labor Statistics data, the Consumer Price Index has risen on average about 3% every year for the last twenty years.

That means your costs and expenses for running your business also increased roughly 3% a year since 1989.

Have you raised the cost of your martial arts classes to match? Here’s some food for thought…

If you were charging $80 a month for martial arts lessons in 1990, and had raised your tuition to match consumer inflation accordingly, in 2014 you should have been charging $153.71 for monthly martial arts tuition, according to the DoL’s inflation calculator.

Now, just think… if you’re charging what the average school charges these days (around $120 a month), that means your expenses have nearly doubled while your tuition has only increased by 33%.

You may feel guilty about raising your tuition, but the fact is your customers really don’t care about your quality of life all that much.

Oh, it’s not that they don’t care about you – it’s just that they’re too busy worrying about their own family to think about whether or not they’re paying you enough so you can have a decent quality of life.

In other words, your students are never going to give you a raise. (You might want to read that last line again, and roll it around in your head a while.) At least, not voluntarily.

As a martial art school owner, you are your own boss. So, the only person who can “authorize” a raise for you is you. And if you don’t increase your tuition regularly in order to cover the increased costs associated with normal inflation, within a few years you’re going to be scraping by and wondering why you’re struggling, even though your gross profits are the same.

The Most Profitable Martial Art Schools All Do This

I speak to a lot of school owners, and I can tell you for a fact that the most profitable martial art schools all do this. In fact, many of them also do regular price testing and pricing research, to see if they are charging enough in their area.

You might be surprised to find that many schools in your area are charging much, much more than you are. And, by pricing yourself in the low- to mid-range of schools, you’re sending a message that says, “We are a bargain-basement martial art school.”

And honestly, who wants to be known for that?

The bottom line? Start increasing your tuition on a yearly basis to keep your profits constant in relation to the economy.