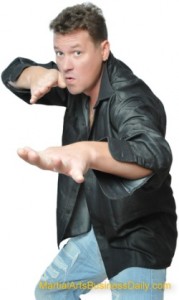 Japanophile – An interest in, or love of, Japan and all things Japanese.

I had run into Jerry at the gym I worked out at, and found we both had a background in Japanese martial arts. Jerry had been practicing JKA karate since the 60’s, and in a colorful recollection claimed he had once been on the losing end of a sparring match with karate legend Frank Smith.

I believed him, although I also believed he was a martial artist of exceptional skill. I watched him stretch and practice slow kicks between sets (a practice that I found to be a bit egotistical, in the middle of a gym, but then who was I to judge) and had personally witnessed his lightning fast oi-tsuki and whip-crack sharp yoko geri keage.

The guy was good.

So, I invited Jerry to teach a guest class at my school. At the time, I was teaching mostly Korean Moo Duk Kwan, and I thought it’d be interesting for the students to be exposed to the JKA style of karate.

“Just one thing,” Jerry cautioned me, “I speak a bit differently when I teach. It’s a habit I picked up from my Japanese sensei.”

No big deal, I thought. The students can handle a little Japanese terminology. I’ll just explain some of the terms for common techniques, and they’ll be fine.

“No problem – I’ll see you Thursday,” I replied.

So, Thursday rolls around, and Jerry shows up in his starched white 14 oz. duck cotton canvas gi – probably a Tokaido, standard issue for most traditional Japanese stylists, I thought to myself. This should be a good experience for the students, to see some traditional Japanese karate.

I introduced Jerry to the class, and went off to the side to speak with some people who had walked in to inquire about lessons.

My head snapped around as I did a double-take on Jerry. What the heck was that?

I then watched in horror as Jerry proceeded to teach an excellent hour-long class on the finer points of kihon to my advanced students… in pidgin English.

Did I happen to mention that Jerry was a white boy?

As I’d expect, to most of you this seems really weird… and I was more than a little freaked out about it, too.

But, it’s just a single small example of the rampant weirdness that ensues when you mix martial arts and Japanophilia (or any type of Asiaphilia – referencing the predilection for all things Asian, not white misogyny toward Asian women, of course).

And, while some students are drawn to this sort of behavior (mostly prepubescent and teenage boys, reminiscent of how Mark Salzman once wrote that as a kid he routinely wore a Kwai Chang Caine bald skull cap and practiced kung fu in a graveyard at night) most normal, well-adjusted folks are quite turned off by it.

But, the questions remains… how can we at once give respect to the cultures where the martial arts we practice once originated, while at the same time maintaining a sense of dignity and normalcy in our schools?

Case in Point: Titles of Rank

Okay, I’ll admit it – I hate using the term “master“. And, to me, I find calling someone “grand master” usually leaves a sour taste in my mouth.

Now, I’ll use the term “master instructor” or even “professor” all day long, because I see it as being similar to saying someone has earned a masters degree, or is a master electrician – it denotes a level of skill and knowledge, nothing more.

But, I’m not anyone’s “master”, and I’ll not have anyone lord their “mastery” over me or my students.

I’m an American, for goodness sakes. And, I only have one Master, and He’s a Jewish carpenter from Galilee. So, the whole “master-disciple” thing kind of sticks in my craw.

As does the use of certain other terms of rank and title, which I won’t mention here for risk of unintentionally insulting someone.

However, suffice it to say that if I use the term “master” or “grand master” in reference to you, I like you and I’m doing it out of respect for your customs and beliefs.

But I still think it’s a bit much.

You see, the reason is that the Japanese, Chinese, and Korean terms for persons of high rank don’t really equate to calling someone “master”.

Now, you can study the etymology of Asian martial arts titles of rank on your own… I just wanted to point out that we Westerners often take things for granted as being fixtures of historical authenticity, when often they are nothing more than fabrications derived from pop culture influences and popular media.

Now, I wasn’t around back then, but I’d hazard to say that not many martial arts students here in the United States were calling their instructors “master” before the television series Kung Fu started airing.

And, the heinous misuse of the term sensei probably started about the time that The Karate Kid hit the theaters and entered the public lexicon of all things pseudo-Asian in America.

Not that I dislike the Karate Kid movies (well, except those last two) or the original Kung Fu series (but they should have let Bruce Lee star in it – after all, he was Asian).

It’s just that I believe these sort of iconic cultural influences can’t but have had some role in creating certain archetypes of martial culture – archetypes that many American martial artists blindly accept as being accurate and authentic representations of the Japanese and Chinese martial heritage from whence they derive.

And the thing is, when we (intentionally or unintentionally) conform to those false archetypes, it just looks plain goofy to people who don’t do martial arts.

My Wife, Trekkies, Ren-Fest, and Bruising My Ego

About 6 years into our marriage or so (I”m guesstimating here), my wife dropped a bomb on me.

“You know, when we first met I thought all that martial arts stuff was just plain silly. Sort of like those Trekkie people, or the people who dress up and sport crazy accents when they go to the Renaissance Festivals – all that jumping around in funny clothes and using foreign words seemed like the same thing to me.”

All this and more ran through my mind as I mentally digested what she was telling me.

And then, it hit me: She was an outsider looking in. Someone with a “normal” perspective on things, so to speak. And, if she thought that about our school, what must other people think when they’re exposed to the martial arts for the first time?

So, I continued to question her about her first impressions of the martial arts, and this in turn led to a serious examination of certain practices I had just blindly adopted over the years.

I soon started using less and less foreign terminology in class and a lot more English, among other things. And, I started teaching class with an attitude and mannerisms that were more in line with my Western upbringing.

The end result – I’m a lot more comfortable with the way I do things now than I ever was when I was a blatant Asiaphile.

And, I’d have to say that my students are, as well.