7 Martial Arts Marketing Methods to Avoid at All Costs

The last thing you want to do when you’re launching a new business is waste your limited resources (money and time) on advertising methods that don’t work. 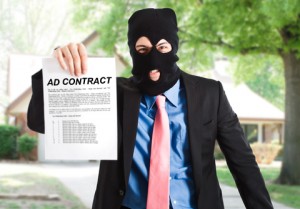 Sadly, the worst advertisement methods are often the ones that are most heavily marketed to small business owners. That’s a fact.

Companies that make their living selling nearly useless marketing to folks like you are the ones who are best at selling it; otherwise, they’d never stay in business.

In fact, I’d say that you’d be better off hiring one of their salespeople away from them and putting them on your staff as your enrollment director, rather than wasting money on these useless advertising methods.

Even so, in the spirit of keeping you from wasting your hard earned money and limited resources on advertising and marketing methods that don’t work, here’s my list of the top seven worst forms of advertising known to mankind.

Advertising in yellow pages directories has to be one of the biggest wastes of ad dollars ever. Sure, once it was the one of the best places to spend your ad dollars, but now that the interwebs have made these directories irrelevant you should avoid them like the plague. Still, I suppose it’s okay to have a free YP listing for your business, if only for the odd chance that someone actually still reads those things.

This is how the yellow pages directories, who once made money hand-over-fist, are coping with their current irrelevancy. Since they no longer are able to sell millions of dollars of ad space in their print directories, they’ve decided to branch out into the very thing that made them irrelevant. Unfortunately, they’re not very good at it, and besides that Google now has the only online business directory that matters. As with the offline directories, there’s nothing wrong with having a free listing in the online YP directories (just make sure it matches your Google business directory listing, hint, hint). Just don’t pay for it, no matter how hard the YP online ad rep sweats you.

Ah, coupon mailers. How I’ve wanted this method to work as well as it’s supposed to for attracting new business. But, it doesn’t (I know this because I have a lapse in judgment and test it again every few years and it always bombs). Think about it; your mailer is mailed to the recipient in a stack of 40 or 50 other mailers. They have to open it and sort through it just to get to your mailer, which they probably won’t see even if it does get opened. Of course, this means they have to be looking for a deal – I mean really wanting to save money – in order to even see your mailer in the first place. Not the ideal client to attract, wouldn’t you say? Don’t waste your money.

Sure, when these daily deal sites first broke out, they were all the rage. You heard stories of businesses selling thousands of deals and getting a stampede of new customers. Problem is, you only get a pittance from your deal for every one that’s sold, and then you’re stuck with actually delivering the service, while the deal sites get to walk with a bunch of profit and almost zero overhead. What’s wrong with this picture?

Not only that, but the very nature of the way daily deal sites work has forced them to push their “partner” businesses to sell their deals at ever lower rates. “That deal won’t sell because you’re asking too much,” they’ll say. Oh, I’m sorry; I thought 75% off my regular rates would be enough…

And, the people who haunt (stalk?) these daily deal sites are the worst form of customers you could ever hope you wouldn’t get. Rarely do they ever convert to a regular customer. Instead, they’re like locusts, traveling in hordes from deal to deal, sucking every bit of value they can out of the business owners, only to move on to the next deal when their time is up.

Don’t do it – you have been warned.

(Note: I’ve recently heard about some people who are getting some traction with these sites. If you have experience with this, feel free to contact me – I might want to interview you on my podcast.)

The same thing goes for paid inclusion (being “featured”) on review sites. The users of these sites are typically skeptical in the first place, and they know that featured businesses have to pay for the privilege. So, they are unlikely to respond well to such tactics. Besides that, Google is where most people get their reviews from these days anyway. And when was the last time you saw a Yelp listing in the search results? That’s right, it was right before Google started featuring their own review system (are you starting to see a pattern here?)

(Update: Facebook’s ad platform has improved a lot over the last few years since I wrote this post. I am currently very bullish on Facebook ads. Done right, they are a great lead-in to a well-designed online marketing funnel and a great way to get directed traffic to your landing pages and offers. You should DEFINITELY look into advertising on Facebook.)

Look, the only reason to get your name on the local football team’s programs, on the back of a little league team’s jerseys, or to put an ad in the high school yearbook is to be nice and support your local community. That’s it. Don’t expect to get any business from it; that way, if you do get the odd client from such an ad or sponsorship, it’ll be like icing on the cake of that warm fuzzy feeling you got when you wrote the check in the first place.

Let me get this straight; first you have to pay a sign-up fee, then you have to pay for a uniform or a pair of gloves for every person they refer, and then you have to deliver your service for free to the lead for a week or more… and someone else gets to keep the money? That’s like an even worse version of doing a daily deal. Please tell me you were drunk when you signed up for this.

Not only is this a bad idea for you, the business owner, but it’s a really inefficient way to pay for leads as well. Generating your own leads is always going to result in a better lead than if you pay someone else to do it for you. When someone else is generating your leads, and they’re getting paid per lead, they’re likely to generate leads any way they can… even if they generate lousy leads.

I don’t know about you, but I want complete control over the quality of my leads. Thus, I want to spend my own money directly to ensure I get a high-quality lead that will convert well. Remember, you’ll always spend your own advertising dollars more efficiently than someone will. Learn to catch your own fish; it’s cheaper and more effective in the long run.

(Note: If you need help generating your own leads, contact my online marketing agency at http://moderndigitalmarketing.com/contact/ for help.)

You’d be broke, sure… but at least you’d have new business coming through your doors, which is more than Mr. “I Don’t Advertise” can say. In six months to a year, he’ll be closed, and you’ll at least have replaced some of your students who quit with new members.

So, when you’re in doubt with your advertising, just do something. Or, read my course on martial arts school marketing, and then do something based on that. Either way, it’s better than sitting on your thumbs and waiting to go out of business.