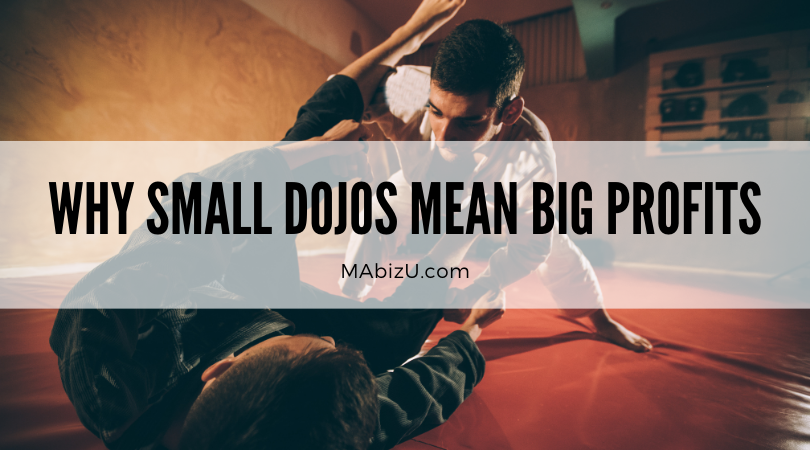 For over a decade I’ve been harping on the fact that small schools equal big profits. In fact, I came to that conclusion long before I wrote my martial arts business manual  eighteen years ago.

I’ve owned or have been a part owner in half a dozen martial arts and fitness studios over the years. All the studios that were 100% owned by me were “Small Dojo Big Profits” studios. And every one was profitable, even during the worst economies we’ve seen in decades.

Moreover, the ones where I managed to keep the overhead to the absolute bare minimum always ended up being real profit machines. I wouldn’t run a martial arts school (or any other business for that matter) any other way. That’s because I know from 20 years experience that my business system works.

Even so, I know that people in this industry tend to get confused about just how a small school can generate bigger profits than a larger martial arts school. So in today’s article, I’m going to spend some time explaining why and how you can make more money running a smaller, more efficient school.

Reason #1: Lower Rent and Utilities and Payroll and Everything Else

Keeping your space smaller means you pay less in rent and utilities. It also means you need fewer employees to run the place, since you don’t need as many students to make a living (see #2 below). You also don’t have to spend as much time and money on upkeep and maintenance of your space, you don’t have to spend as much on supplies, and overall you can keep your budget much smaller while keeping your profits high.

In short, owning a small school leads to bigger profits because everything costs less when you’re operating on a smaller scale. Less space (and yes, fewer students) means a small school costs a lot less to run. Yet, small doesn’t have to mean poor, as you’ll see in the illustration below.

Operating a smaller school doesn’t just mean a smaller physical footprint; it also means operating with lower enrollment numbers as well. The uninitiated might think this would equate to lower profits, but that’s because they’re looking at gross profits only. However, you’ll soon see this just isn’t the case when you begin comparing net profits instead.

Since you can operate a smaller school at a higher net profit margin, that means you don’t need as many clients to make just as much money as a large school owner. Let’s run some simple numbers to illustrate this:

So, in the scenario above the small school owner actually makes the same net profit as the larger school owner, with just a little more than half the students. Now you see why I’ve always preferred the Small Dojo Big Profits approach, long before I ever put pen to paper about it a decade ago.

So how does less work equate to more profit? Let me tell you, owning and running any business is hard work. The bigger the business, the more work you’ll have. Yes, you’ll have a bigger staff if you own a larger business, but remember that just means the workload is divided… but there’s still more work to go around. That’s why I tell school owners that having a bigger school just means you work harder for less money.

I started my first school from scratch with no cash, no loans, and no credit, and built it to 180 students on site and another 100-150 off site. I ran that school for ten years. My second school was designed to be smaller, and it ran at 120 students before I sold it. And my last studio was a boutique boot camp and kickboxing studio, in a tiny 1,000 square foot location. I only spent 12 hours a week in that school and pulled several thousand in profit from it each month.

The smaller the school, the easier it is to manage, and the less time and effort you need to spend to earn the same amount of money. And, the more you make per hour of work.

So how does less work equal more pay? When you work less hours for the same amount of profit, your hourly pay is greater. If you work 130 hours over the course of a month to bring home $10,000 in profit, that means you made around $76 bucks an hour for your time. But the school owner who works twice as hard makes half as much for their time. Its simple math.

Also, being overworked leads to exhaustion and burnout. When you’re running a smaller school, you can (eventually) work a shorter schedule while still running a profitable school. Sure, you’ll still work long hours the first few years during your launch, but after you’re up and running and have a system in place for operating your school you can cut back on your hours quite a bit.

So, while the big school owner is working 10-12 hour days just to keep his school running you can enjoy a modest and relaxed 30-hour work week. You’ll avoid burnout and be sharper and better at the things that make the most money for a martial arts school (customer service and marketing). Thus, having the freedom to work shorter, more focused work days will lead to more referrals and greater profit margins down the road.

(Note: When you plug in the hours worked by the small and big school owners in the above example with their take home profit, you’ll find that the small dojo owner is making about twice as much per hour. Yet another reason to run a small school…)

Of course, if you want to run a small yet efficient martial arts school you need a proven road map for success. If you haven’t picked it up, you should read Small Dojo Big Profits before you even begin to choose a location for your studio. But, even if you have already opened your doors you can still use it as a playbook for downsizing and increasing your profit margins considerably.

But be warned; eventually every small school owner starts to think they need a bigger school. I’m here to tell you in advance, you don’t need those headaches. Just keep your small school and you’ll keep making big profits for a good long time. You can thank me later.