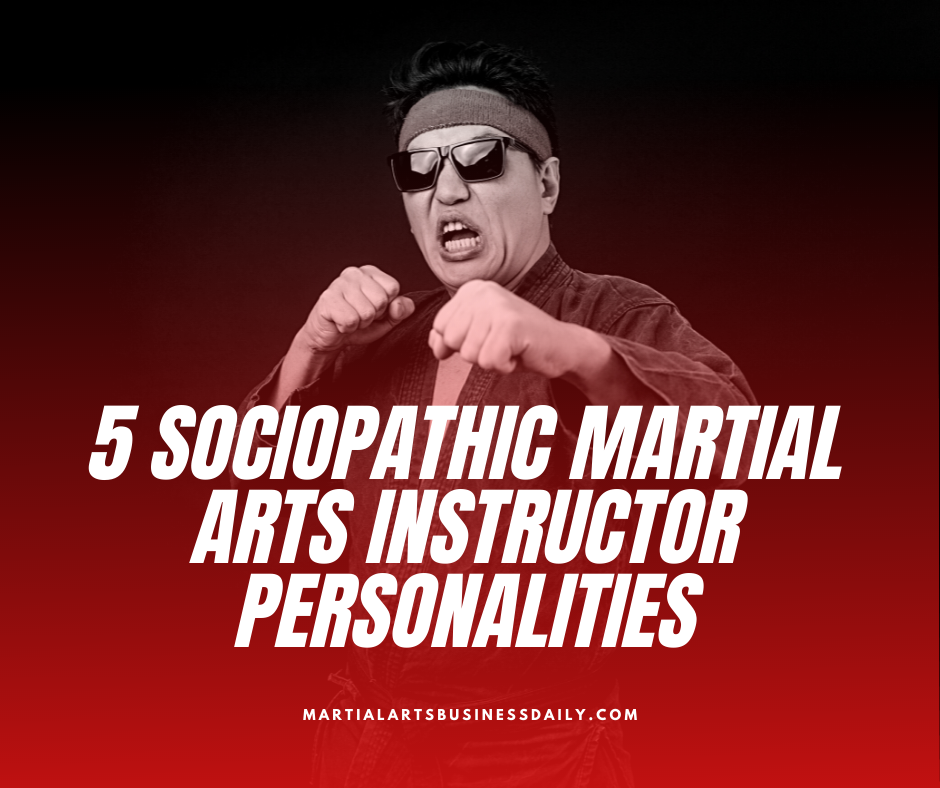 No matter what anyone tells you, this is a personality-driven business. For that reason (and in light of recent events), I think it’s time to discuss sociopathic martial arts instructor personalities…

Although I’m sure you can come up with dozens (nay, hundreds) of horrifying examples based on your own experiences (every black belt has a crazy instructor story, it seems) I have narrowed the field down to just five sociopathic martial arts instructor personalities that you should never emulate.

Obviously this article is satirical in nature, but seriously – if you catch yourself even remotely emulating one of these personalities, please check yourself immediately. (In other words, we already have enough jackasses in this industry. So, don’t be a jackass, okay?)

Now, let’s examine the 5 sociopathic martial arts instructor personalities that will ruin your school, in the hopes that we can avoid becoming like (or becoming a student of) one of these jokers. 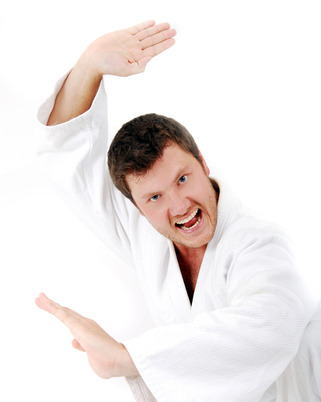 “Whatever you’re doing, just assume you’re doing it wrong and save us both some time, okay?”

Ah, The Vituperator. No matter what you do, it’s wrong, even if you’re most certain it’s right, and especially if you’re doing it better than your instructor.

Incidentally, you will almost never see The Vituperator working out with his students. This practice (or lack thereof) often spawns the sub-class of The Vituperator, the Fat Master. And while benevolent Fat Masters have occasionally been found in the wild, they are to be avoided if possible. 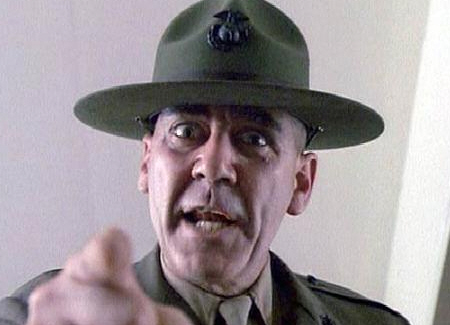 “What is your major malfunction, white belt?”

Closely related to The Vituperator, The Disciplinarian hands out push-ups like they’re going out of style. Pacing back and forth in front of her class with her hands clasped behind her back, she adopts the demeanor and vocal expressions of GySgt Hartman from Full Metal Jacket whenever she steps onto the dojo floor.

“Are you eye-balling me? Don’t you eyeball me! Eyes front! Focus! Stop! What are you doing? Drop and give me twenty! Yes, the whole class – are you deaf? Let’s go!”

Watching her students like a hawk, she is always looking for something wrong or out of place, instead of reinforcing what her students are doing right. Along with The Vituperator, she turns out the worst students you’ll ever see compete at a tournament. However, her students always seem to bring home medals, since the other black belts are afraid she’ll cause a scene if her students lose. 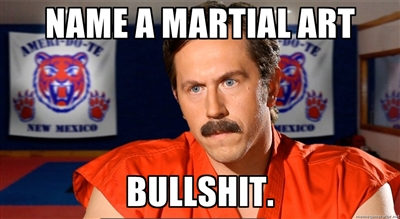 This specimen is something to behold when seen in the wild. Arms crossed. Eyes squinted. Slight sneer. Attitude aloof. Everyone on Facebook, YouTube, and fighting in the UFC is wrong, because that shit will get you killed on the street, in prison, on the elementary school playground, etc.

The Badass often will enjoy beating on their students in the sparring ring (“Gotta’ toughen you up – there’s no ref in the street!”), but a large number of Badass instructors exhibit Fat Master attributes and behaviors. Fat Masters who also exhibit Badass traits will often have stories of their earlier exploits that start with “Back in Bagram…” or “Back in the ‘Nam…” or “Back in the Golan Heights”, although some will favor the less specific but equally badass sounding “Back in the Hood…” as well.

Typically, these personality types have less than a dozen active students training with them, but the type appears to be cross-breeding with The Cult Master (see below) in recent years. This has led to the proliferation of large schools containing hundreds of students paying good money to have their groins kicked and eyes gouged during full-contact training with no protective gear (and that’s just during the warm-up). 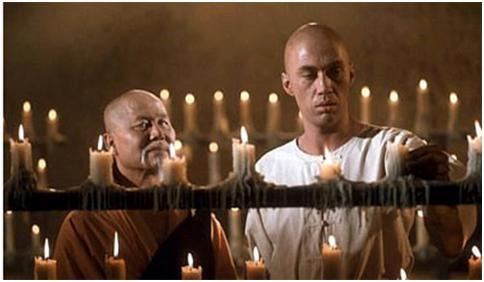 “What is the sound of one wallet emptying?”

Student: “Sir, I have a question.”

Student: “What would you do if you were attacked by more than one person?”

NM: “What is the sound of one hand clapping? If a tree falls in the woods, does a bear fart in response? Who can fathom the mysteries of whether MSG really causes migraines? These are all answers you must seek on the path to knowledge.”

Student: “Oookaaay… But about that multiple attacker scenario, I really want to know because we have street gangs moving into our area, and my neighbor got jumped a few weeks back. He’s in the hospital now. They say he may not come out of his coma.”

NM: Smiles beatifically. Sips his organic passion fruit green sibilant dragon tea. Wonders if he can get an early tee time after his tea time.

Obviously, The Nebulous Master has issues. Even so, any instructor who practices public navel-gazing and who can memorize a few fortune cookie sayings is guaranteed a steady stream of students, and income, for life. 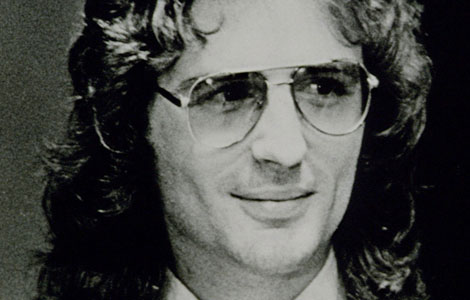 “Later, I will allow you make a nutritious soup from my perspiration. It’s full of my chi, you know.”

Thought to be extinct following the advent and ascendance of YouTube in modern culture, this instructor personality type has experienced a recent resurgence. Cult Master types are known to share traits with all of the above personality types and sub-types, making them incredibly difficult to identify.

However, one has only to look to the instructor’s students in order to identify The Cult Master. Observation of one or more of the following student characteristics are considered indicative of Cult Master status:

A surprisingly high percentage of these personality types either have a criminal record, or are known to associate with criminal types. Meaning that, if a potential student were only to do a background check on their instructor (or perhaps check their name versus the public sex offender registry for their state), they could easily avoid falling prey to Cult Master types.

Alas, most students who join the personality cults of Cult Master types simply assume that their instructor is acting in their best interests when they hand them their paychecks each week in exchange for a small subsistence allowance, or when the Cult Master has them ironing his uniforms, or while they’re giving their “master” his morning foot massage and pedicure. It’s usually only after the student catches their “master” sleeping with his wife (for the third time, because the first two episodes were obviously accidental) that they wake up and leave the cult.

Well, that wraps up today’s article…

Have a crazy instructor story you want to share?