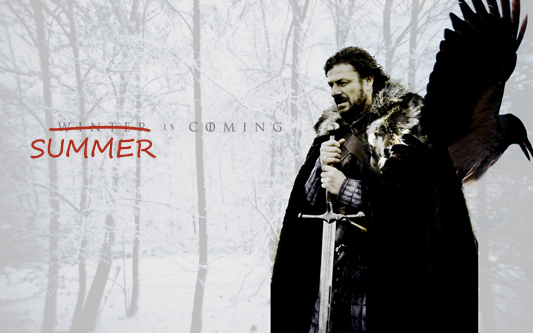 Summer Is Coming… Are You Ready?

Like the deadly winters in the fictitious world of “Game of Thrones”, the phrase “summer is coming” bears ominous tidings for many a martial arts school owner.

But does summer really have to be such a drag for martial arts school owners?

I’ll be the first to admit, for the first few years of running a school, I dreaded summers. Summers were when everyone went on vacation, when my students wanted to “take a break”, when parents had them enrolled in summer camps and were too busy or broke to keep them enrolled in my classes.

But no more. In fact, summer is a time I tend to look forward to these days, because it’s one of the busiest and most profitable times of the year. And all because I learned a few simple rules to follow in order to make my summers a blast. And, they’re pretty simple to follow.

I’ll bet you’re chomping at the bit to hear them right about now. Well, I’m not going to make you opt-in for some silly trumped up webinar or conference call to hear them. I don’t have time for that these days, either.

Nope. And I’m not going to promise (in my best monster truck announcer voice) that you’ll “fill your school with HUNDREDS of students this SUMMER… summer… summer!!!”

Because I know you don’t believe in fairy tales, either.

Instead, I’m just going to share with you what I’ve learned over a couple of decades of running small, profitable schools. So here goes…

Look, one of the first things you learn if you want to survive and thrive in business is that you don’t get to dictate to the market what the market wants. Instead, you either listen to the market and provide what they want, or you go out of business.

Now, I know a lot of you read that and you start to bristle, and that puffed up voice in the back of your head starts telling you that you don’t have to pander to anyone, you’re an nth degree black belt, bearer of the secret flame, blah, blah, blah…

Good for you. But if you let your ego get in the way of making money, you’re going to have a very unhappy and short-lived career as a professional school owner.

So, listen to your market. They are telling you what they want when they enroll their kids in other activities during the summer. No, you don’t need to start teaching elite summer soccer training camps. What you should do, however, is offer a similar service during the summer, in order to retain the customers you already have.

Because you know as well as I do, a lot of those students who “take a break” and say they’re coming back when school starts again, aren’t. It’s up to you to either keep their interest through the summer, or lose them forever.

So, you can be proud and poor, or start offering summer camps. Your call.

Let’s look at this from an entirely different and opposite perspective for a minute. Instead of looking at how to keep the people we already have, how can we use the consumers’ tendencies in order to get more students?

Simple. As you already know, summer is a time when parents tend to stick their kids into some activity to keep them busy, but only for a few weeks or months. You know, so they don’t have to deal with them 24/7 all summer. (If you’re a parent, you tell everyone it’s for your child’s enrichment and to expand their horizons, but every other parent knows the deal.)

If you think about it, this can definitely work in your favor. Years and years ago, I was told by the consulting/billing company we were using at the time that you should never enroll students on a short-term membership during the summer. Stupid me, I listened to them, ended up losing thousands of dollars of business that summer.

Next year though, I said “screw that” and started doing things my way again. So, I started offering short six-week summer membership packages at a price point that no parent could turn down (I gave them six weeks for the cost of one month of classes, no registration fee, plus a free uniform). And my classes were full, all summer long.

Granted, a lot of those students came and went that summer. Many were just in town visiting their “other parents” or aunts, uncles, and grandparents over the summer. And I could care less.

I made several thousand dollars a month extra over the summer that I normally would not have made. Plus, a good number of them did stay and converted to regular members, which meant that my regular enrollment actually grew that summer.

Not only that, but I believe the psychological effect of having full classes all summer worked in my favor to keep more of the students I already had in classes. People want things that are in high demand, and moms want their kids to have at least as much as their friends do.

Think on that for a moment, and you can understand how having a lot of activity in your school at certain key times of the year can help increase your enrollment and retention.

So, start thinking about the summer as a unique opportunity to get people into your school who might never walk in otherwise.

Summer Sur-thrival Rule #3: Thou Shalt Have Policies, And Stick To Them

I know some of you softies want to give everyone one month a year or two weeks a year or whatever when your students don’t have to pay, so they can go on vacation. And I say you’re a sucker for doing that.

Do you think their country club does that? Their cable company? Their cell phone provider? Their car leasing agency? Their landlord?

Nope. And the only reason they ask you to do it is because they know you’re a sucker. Trust me, your students really don’t think much about how you’re going to eat if your school shuts down, no matter how nice they are to you or how much you love them. I’ve launched, run, and sold three studios, and I know from experience that people forget your name the moment you walk out the door. That’s just the way it is.

So stop letting your students take advantage of you, and start thinking about your own family and how you’re going to best provide for them.

(Besides, there is nothing I hate worse than a wishy-washy student. They’re a pain in the rear to teach, on top of the fact that they also make your ability to predict your cash-flow a living nightmare.)

So, you need to have policies that keep people from jumping in and out of your classes at their whim and leisure. For this reason, you need to use contracts that are a year in length, and you need to enforce them. I’ve written on the reasons for this at length previously, so I’m not going to expound on them here. However, I will say that it’s a must if you want to keep your students from bailing on you every summer.

Enough with going all Ayn Rand on you. Just give it some thought, okay?

Believe me, a little rational selfishness will go a long way toward keeping you happy this summer. And even if you’re the enlightened self-interest type, you still can’t help anyone if your doors are closed.

Questions? Comments? Feedback? I like to hear what you think! Post your comments and questions about surviving and thriving in your martial arts school during summer below.