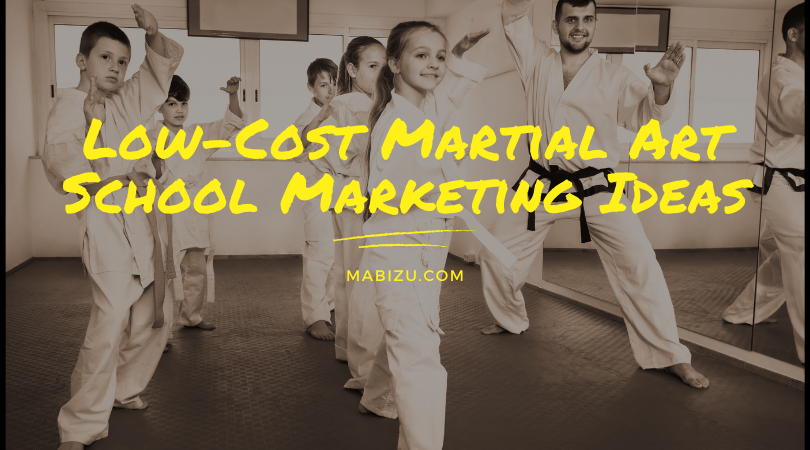 Martial Arts Marketing Ideas That Are Not Just For Karate Schools

Alright, let’s talk about some karate advertising ideas that are a little off the beaten path.

When I started my first solo commercial martial arts school two decades ago (back in the Stone Ages to those of you who grew up with smart phones and WiFi), there was no internet to speak of, at least not anything worth using for marketing purposes.

Shocking, I know. Yet, somehow, I survived those first few years in business, and went from a part-time class in a rec center to running a full-time studio with 150+ students in a little over two years.

And here’s the kicker. I was a poor, penniless lad when I started out. As in, me and the minimum wage were old pals. In fact, I often worked two jobs, on top of my teaching duties, just to get by (and, incidentally, to be able to invest my profits back into growing my school).

So how’d I do it? I improvised.

In this article, I’m going to share some of the karate school advertising ideas and concepts that I used to build my school, without using any internet marketing, and without having the funds to spend on expensive direct mail, radio, or television advertising.

But before I begin, I’ll provide one caveat – these methods are on the “high-effort/low-cost” side of Massie’s Marketing Cost Axiom, which goes something like this:

I hope those of you who read this will not write these marketing methods off out-of-hand, as they have been responsible for considerable growth in my schools to date.

Marketing by being everywhere at once is nothing new. However, it’s usually accomplished by spending considerable dough on saturating an area or market with a marketing message.

In this application, however, we are going to use the principle of Ubiquity to accomplish two principle goals:

The way I did this is simple – I taught off-site classes in as many locations as I could possible handle. I mostly targeted these off-location classes to my primary market, which has always been children and families. Secondarily, my target market was college students (I was right down the street from a private university at the time) so I worked that angle as well.

To accomplish my goals, I targeted locations and businesses that served my demographic. I approached large day cares and the local after-school enrichment programs, and negotiated mutually beneficial arrangements to teach classes for these programs once or twice a week.

And, I approached the local college with regards to teaching classes on campus. Note that I was turned away several times before I was hired by the school. And although they already had a martial arts instructor teaching for them, I used my noggin and proposed a completely different class and curriculum. That got me in the door, and I stayed on the adjunct faculty for several years.

I also continued to teach classes for the rec center where I started.

Was I spread thin? You bet. At one point I was teaching 13 fitness classes a week outside of my regular class schedule at my school. But was it worth it? Absolutely. Being everywhere at once meant that I became the local “martial arts guy” who everyone knew, which also meant I was the person most of the locals called when they wanted to start martial arts.

Eventually, after my studio grew significantly I had to let some of those classes go. However, I held onto them as long as possible, not because of the extra income, but because of the exposure I got. Do not underestimate the power of being ubiquitous in your community.

This goes hand-in-hand with tip #1 above. One thing I decided early on in my martial arts teaching career was that I wanted to help people. In other words, I determined to be of service to my community.

Because of this desire to serve, I made it known to all and sundry that I was available to teach free presentations on personal safety, child safety, and women’s self-defense to any business, organization, government entity, school, non-profit, or community group.

Let me repeat that – I provided free womens self-defense and child safety workshops and lectures to anyone who asked.

As it turns out, this was one of the best things I could have done for my business. The personal satisfaction I received from serving in this manner would have been payment enough. But, I never could have imagined the benefit I received from the exposure it got my school.

I ended up in the local paper more times than all the other schools in my area combined. I was invited to speak at numerous community events, and also became the de facto child safety instructor for the local ISD. I was invited to present my lecture to numerous sororities and other local organizations, including various scouting troops, and got invited back on a yearly basis.

In short, serving others was instrumental in helping my school grow, and rapidly at that.

If you decide to go this route, I recommend that you give freely of your time, and that you do so without any expectation of a reciprocal benefit. That attitude will open more doors for you than the selfish, self-aggrandizing guy or gal down the street.

Just do it because you want to help – I can assure you that you’ll never regret it.

It has often been said that “free” and “you” are the most powerful words in advertising. Thus, the “free offer”, the “buy-one-get-one free”, “free cell phone with contract”, and so on.

Of course, virtually every martial arts school has some sort of free trial offer they’re using in their marketing. But, what about using “free” as a way to create good will in your local community, while also reaching an entirely new clientele that you wouldn’t normally have access to?

Yes, this is possible, and in fact it’s much easier to do than any of the previous methods. All it requires is saying “yes.”

Stay with me for a moment.

You know how local organizations are always having those fund-raising raffles? For example, the PTA, the Knights of Columbus, the Optimist’s Club, the high school booster club – I could go on and on, but I think that’s a good working list to start with.

When they contact you for donations and support, how about giving them four or five gift certificates good for a free month and a uniform or pair of boxing gloves to raffle off?

Better yet, why not reach out to them and offer to support their next fundraiser or raffle with said donation?

This costs you nothing (except the cost of a student uniform or a pair of bag gloves, which is negligible), but it will perform two incredibly beneficial functions for your studio:

Not only that, but you’ll also benefit from the following:

Believe me, this works, and it’s well worth the investment of a few student uniforms or some inexpensive training gloves to do.

In case you didn’t notice, that’s the central theme of the low-cost karate advertising ideas I’ve suggested here. With regards to this, here’s some final advice…

Be generous. It’s not only good for the soul, it’s also good for your business as well.