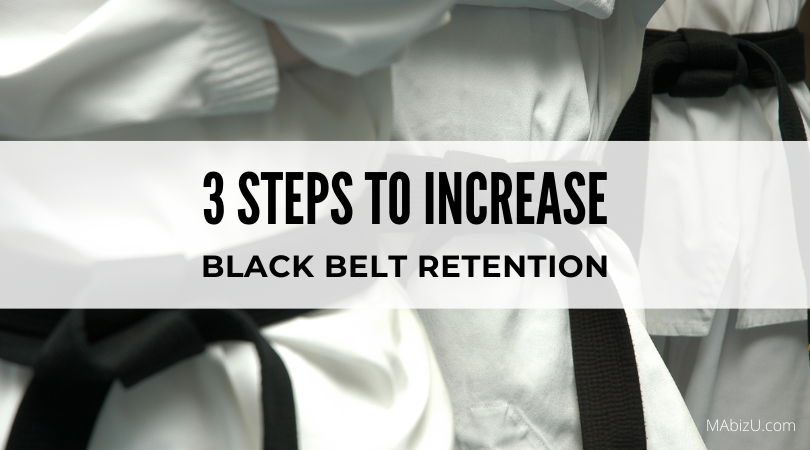 How To Keep Students To Black Belt And Beyond 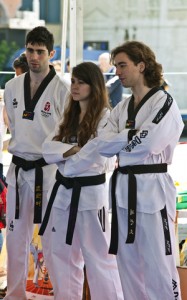 Black belt student retention requires a lot more than just enrolling your brown belts on a six-year contract (I’m joking, but I’d bet dimes to doughnuts that there are schools that actually do this).

If you want to keep your students to black belt, and long after black belt, there are three things you need to focus on to increase your long-term retention.

I’m going to explain each of these in this article, and hopefully by the time you’ve finished reading this post you’ll have a better understanding of why students drop out at black belt, and what to do to correct it.

Why Students Drop Out At Black Belt

Many instructors seem to have a misguided attitude toward black belt student retention. In their mind, they’ve invested all this time and effort into producing a black belt, so now it’s time for that student to pay them back by sticking around and helping them produce more black belts.

If you want to retain students to black belt and beyond, you need to eliminate this sort of thinking from your mind. True, in Eastern cultures this may be the case, but we are dealing with Westerners who have a western mindset. Generally speaking, Westerners tend to think of self before community, whereas eastern cultures tend to think of community before self. So, we have to look at things from a Westerner’s perspective when we approach this topic of retaining black belt students.

The main reasons why students from Western cultures drop out at black belt are:

If you want to improve your black belt student retention, then you need to address these three issues long before they occur. Believe me, trying to address them after the fact is often a dollar short and a day late when it come to keeping a student around.

Now, let’s look at each of these three reasons, and examine what we can do to prevent this from occurring with our students so they stick around long after reaching black belt.

When I refer to purpose, I don’t mean individual purpose, but purpose in the overall scheme of the school. Think about it – as a black belt, you’ve gone through years (hopefully) of hard training and dedicated effort. You take your test, get your black belt, and then…

Black belt should not just be a ceremony and a piece of cloth. It should instead become a doorway to a new beginning in training and responsibility. Trust me, your black belts want to be given more responsibility, because they want to use what they’ve learned to help others grow and develop.

Now, this doesn’t give you license to use your black belts as a free labor force, but it should make you think about how you can provide your black belt students with opportunities to lead others in your studio. This could mean mentoring other students one-on-one or in small groups before and after class, or helping with organizing school events, or teaching a segment at your annual training camp.

It can also mean being “on staff” at gradings and promotion ceremonies. This doesn’t mean that a new black belt should get to sit on a grading board, it just means they might appreciate being included in the planning and execution of such events. In other words, let them behind the curtain so they feel like they have a purpose in your school as a black belt.

I’ve always felt like earning a black belt should be like gaining membership into the VIP area of a club. To a black belt student, it should feel like they’ve just entered through a door where they get to enjoy benefits that other students don’t have the privilege of enjoying, and they get to learn things other students don’t have the privilege of knowing. Make your black belt students feel like they now belong to special exclusive club reserved specifically for active training black belts in your school, and it will go a long way toward keeping them around after they reach first dan.

Continuation of Goal-Setting After Black Belt

Have you framed the idea in your students’ minds that there is a whole realm of possibility for advancement beyond black belt? This is related to the issue I have with those “Black Belt Is My Goal!” banners I see on the walls of commercial schools. That’s great and all, but if black belt is the ultimate goal, what happens after that?

Also, let’s not forget about setting concrete goals beyond black belt. This could be second degree or third degree, or it could be competition goals, or it could be earning an instructor’s credential. Whatever it may be, make sure your students are aware of what achievements and accolades await them beyond black belt, so they can start thinking about setting goals that are beyond just earning the first degree rank.

Helping Your Students Maintain Their Passion for Training Beyond Black Belt

Do you even have a curriculum beyond black belt that is more than just learning another form? Because trust me, no student ever said to themselves, “I can’t wait until I get my first degree black belt so I can learn that second degree black belt form!”

Maybe your instructor never had anything like that in place, either. This is typically what happens when folks are rushed to black belt, or when new black belts rush off to start their own schools and they stop training with advanced level instructors. Whatever the reason, I suggest you immediately plug in to someone who has that level of training in place, and get it for yourself so you can then pass it on to your own students.

Only by being introduced to new material and new challenges in training will your students retain their passion after black belt. And, it’s up to you as their instructor to have this sort of training in place, long before they ever reach first dan.

Again, black belt student retention is about more than enrolling students on lengthy contracts. It’s about helping your students reach their full potential, and it’s about recognizing them for their hard work and sacrifice. So, by making sure your students have a sense of place, that they have set goals beyond black belt, and by helping them retain their passion for training, you’ll ensure that you keep students in your school long after black belt.