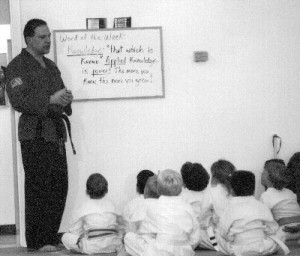 That’s me in my first martial art school, circa 1997, teaching my character education program to a group of 4-6 year olds. I still miss that school, but mostly I just miss having a full head of hair…

I’ve been getting a lot of questions about how to sell a martial art school lately, so it’s obviously a topic that a lot of school owners are interested in and worthy of an article.

Over the last twenty years I’ve started, run, and sold three martial arts studios; two were full-time studios and one what I would consider a part-time studio (I only spent about 6-8 hours a week there, but still profited a few grand a month from the place).

So, I do know a little bit more than the average school owner about selling a martial art studio. Obviously, I can’t cover everything you need to know to have a successful sale in a few paragraphs, but what I can do is cover the basics to get you started in the right direction.

Why Sell a Martial Arts School?

Even if you’re not thinking of selling your martial arts school, this is still a topic that you need to know about. It goes hand-in-hand with my six-component coaching process, step #6, which is “Have an Exit Strategy“.

Why do you need an exit strategy? I’ve sold my schools over the years for multiple reasons, and there really is no simple answer to that question except that life happens, and you need to be prepared for it.

Besides that, you can’t teach forever. I know, I know – master so-and-so taught until his dying day. Well, did you ever think that was because master so-and-so was a crappy financial planner and money manager?

Believe me, teach long enough and there will come a day when you want to retire. Best that you start thinking about a succession strategy now so you’re ready when that day comes.

The Steps to Selling a Martial Art School

Step #1 – Make Sure This is What You Want

The very first thing you need to decide is whether or not selling your school is really what you want. I still have regrets about selling my first school, over ten years after the fact. I sold it for a good price, and things turned out pretty well for me afterwards (I wrote Small Dojo Big Profits after I sold it, mostly because I had no idea what to do with all the free time I suddenly had on my hands).

However, I do have regrets. It was my first successful studio, my baby, if you will. Also, issues came up during the succession that caused me to second-guess my choice of buyer (those were later hashed out before the sale was final). Finally, that school was a profit machine, and the factors that went into that would be difficult to reproduce again (very low rent in a high median income area, lots of kids around, etc).

Plus, there’s something else you need to consider, and that is how incredibly hard it is to start a successful business from scratch. I’ve started two other studios since, one during the onset and worst stages of the recent Great Recession. Quite honestly, at the time I started my second school I’d forgotten just how much time and work goes into starting a successful business.

That’s definitely something you need to factor into your decision. Starting a school from scratch gets harder the older you get, because youthful exuberance and enthusiasm tend to fade over time. If you ever decide you want to start another school, sure, you’ll have experience on your side…

But consider the circumstances that surrounded starting your martial art school. For me, I was young, single, and broke – three factors that made it easy to sacrifice everything to get my school off the ground. The second time around, I was married, and that changed things quite a bit. The third, I was a new father, and let me tell you that complicated matters even further (thus, the “micro-studio” approach that I took).

So, make sure it’s what you want before you sell. Don’t make any rash decisions but instead, take your time and mull it over for a good while before you decide.

I don’t care what anyone tells you, there simply are no hard and fast rules for valuating a business, and anyone who tells you otherwise has either never sold a business, or has an ulterior motive.

Coming Next Week: How to Sell a Martial Art School, Part II

This is a lot of information to cover all in one sitting, so next week I’ll post part II of this article, where I’ll talk about finding a buyer and negotiating a sales price.