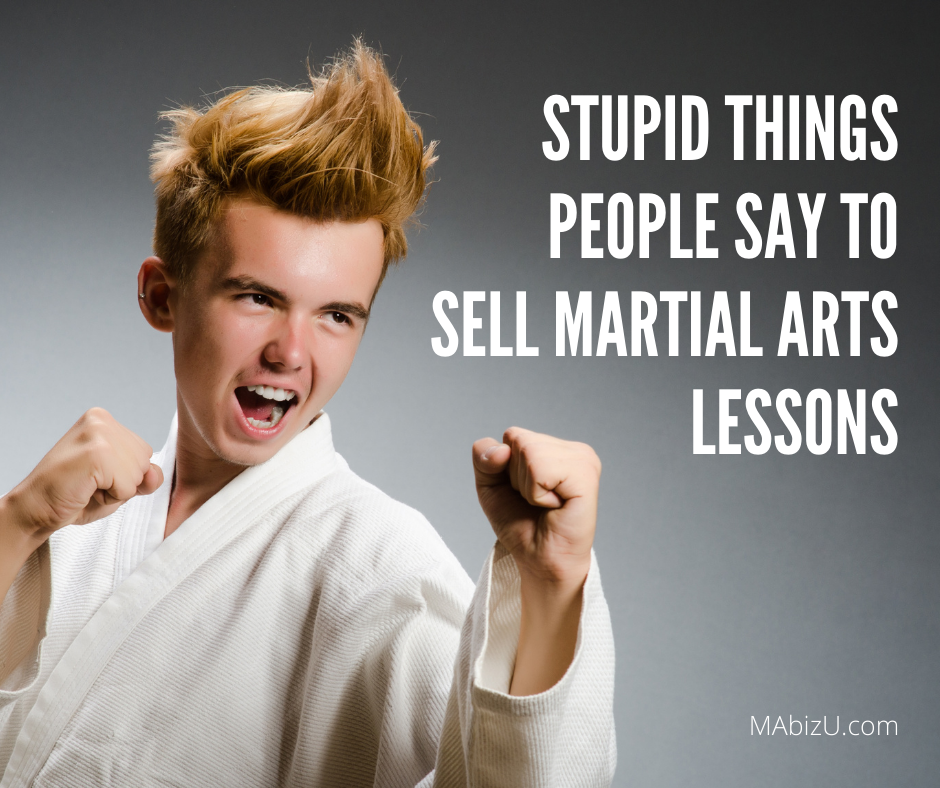 I recently revised and updated my Phone-to-Enrollment Martial Arts Membership Sales System, which is a resource for martial art school owners who want to sell more martial arts lessons without resorting to slimy, hard-sell tactics.

And, as I was working on it, it occurred to me that I’ve heard a lot of bad advice about how to sell martial arts lessons over the years.

Some of them are humorous, some are just downright despicable, and some… well, some dwell in that grey area of half-truths and white lies. But I’d say the fact that these “grey area” tactics are used to manipulate a person into signing an extended contract for martial arts training would indicate unethical intent by default.

How I Went Over to The Dark Side, and Came Back a Better (Sales)Man…

As I detailed in my first book, Small Dojo Big Profits, early on in my career as a school owner I actually fell for the billing/consulting company spiel, took their advice, and started using their slimy hard-sell tactics.

Well, if you’ve read my book, then you know what happened. It didn’t take long for me to realize I was selling my integrity, bit-by-bit. Not only that, but I also came to realize that by using these tactics I was destroying the respect my students had for me.

So, I stopped using them and went back to the same old honest and straightforward sales approach that I’d developed in the first place. And wouldn’t you know it, my new-found confidence in the honest sales approach I’d always used resulted in an increase in our conversion and enrollments rates.

With that in mind, I thought I’d share some of the things I’ve been advised to say and do over the years to sell lessons, for two reasons:

So, let’s get started. The following is an excerpt from the revised and updated release of The Phone-To-Enrollment Martial Art School Membership Sales Success Course. Enjoy.

Your Customers Aren’t Stupid, So Respect Their Intellect

Many of the tricks I’ve heard “martial arts business consultants” suggest over the years made me want to go shower just by hearing them. Here are a few doozies I’ve heard or been advised to use over the years:

Can you see how obvious the con is in each instance? Believe me, the majority of your customers will, too. And, even if they go along with it, you will lose a considerable amount of their respect by using these cons on them.

Bottom line? Just tell the truth! I can assure you, no one ever lost any respect by telling the truth to their customers. Your customers will appreciate it, and they’ll be a lot more loyal to you in the long run as a result as well.

My private coaching clients have been the first to benefit from the new and updated training, and the feedback thus far has been phenomenal. If you want to find out how to sell more memberships without selling your soul, keep your eyes peeled for the release.

NOTE: You can find more information on the updated version of my martial arts sales training system by clicking here.