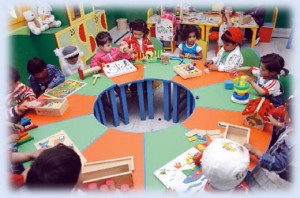 Does this look like your school? The Texas State Legislature thinks it does...

Then, you should know that the Texas State Legislature thinks your martial arts school is a daycare facility.

This is an email I just received from Danny Passmore in Waco – I checked it out on the Texas Legislature website and it’s legitimate:

Follow this link for a short news clip. If these bills pass with their current language, many martial arts, dance and gymnastics schools would be forced to license as a daycares or shut down.  It’s not just the expense involved (which is several thousand dollars each year), but we would also be required to purchase certain types of toys for certain ages, have a minimum number of instructors per certain number of children, have certain square footage per child and attend yearly workshops for continuing education (as many of us attend seminars to stay updated in our industries).  There are also plans in the works to require daycare staff to have a 4 year college degree in child care (CDA).

This language is not a mistake as stated by one bill co-sponsor.  Many fear if after school programs (such as the Boys and Girls Clubs) are put out of business, the government will need to step in and build after school centers for low income families.  Everyone could then send their children there and avoid the high cost of for-profit daycare which would put them out of business as well.  The fear is that it’s a tactic for bigger government and higher taxes.  That notwithstanding, we are not daycares.

If you live outside of Texas, remember that once a bill passes here, it will be coming to the rest of the country soon.

I will be addressing the Texas House of Representatives Committee on Human Services regarding the language of House Bill 601.  You are urged to call your Senator and tell them to vote no on Senate Bill 68. These two bills are almost identical, so if one doesn’t pass one branch, it may pass in the other.

Don’t assume definitions.  For example: there is no definition of after-school programs.  We all assume this means after school until parents get off work, but that language is not in the bill.  Remember, this is written by lawyers. Midnight is after school. Lawyers could and will spin this to mean any evening recreational business.  That is just one example.

Please pass this along to people you know if martial arts, dance, gymnastics, cheer and other for profit after school programs.

Here’s a link to the news story featuring Danny’s school:

And, here are links to the House and Senate Bills:

What you should do:

1. Look up your STATE representatives and urge them to vote “NO” on the above bills before they go to vote.

2. Inform your representatives that we are not daycares – our mission is simply to teach martial arts! We do not tutor, feed kids, give them naps, etc. Urge your representatives to include language that excludes martial arts schools, gymnastics schools, and dance schools from this legislation based on their status as skill-based educational programs.

3. Point out that this will absolutely kill many small businesses in Texas… businesses that are already struggling during this period of economic recession.

Act now, or next year you may find that your children’s martial arts programs will have to be licensed as daycare facilities as early as next school year…