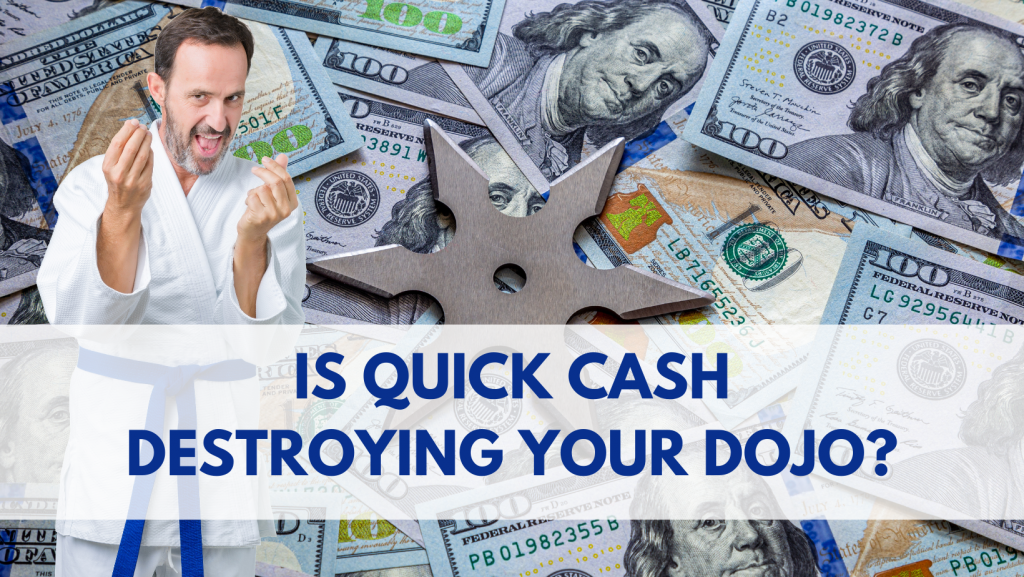 You see it A LOT in our industry these days:

“After I joined Master So-and-so’s consulting program, we had our first $40,000 month ever!”

Is it true? Sure it is, but guess what they’re not telling you…

What they’re not telling you is that the huge jump in revenues these schools claim is mostly due to cash outs.

Now, for those of you out there who haven’t heard this term, a ‘cash out’ is when you enroll someone on a long-term membership and take all the money up front in a lump payment (sometimes called a “PIF” – paid-in-full). This is the cornerstone of at least a few “business systems” that are being promoted in our industry.

Not so fast… I want you to think about it a second – what’s wrong with this business model?

Unless you are EXTREMELY disciplined with your money, cash has a tendency to get spent. I have witnessed more than one martial arts instructor who did a good deal of their business using cash outs that ended up regretting it. They had already spent the money, their classes were full, but their monthly cash flow and bank account had dwindled down to nearly nothing (more on that in a second).

Now, the rebuttal to this has always been, “Well, you just go out and sell more cash outs!” That’s great, but what if there’s a month when you are counting on cashing out half or more of your new students so you’ll have operating expenses covered… and no one wants to cash out?

And what about recessions? You think people want to hand over their savings account or stack up more debt during a recession? No way… when money is tight, people tend to want to pay their tuition over time.

Personally, I have never really liked “cash outs.” Instead, I have always preferred to have a steady monthly income of payments coming in to my bank account each month. Here’s why…

I personally know of one instructor who succumbed to the charms of making a lot of quick cash up front. He was a young guy in his twenties, and found he was really good at selling. So, he figured out pretty quick that he could just get a lot of cash outs, and make a ton of money fast instead of having to wait and get it in installments.

He started counting on making those cash out sales every month to pay his bills… and then one month, he couldn’t get enough cash outs to cover his expenses. The guy had a school full of students, but only a small percentage were actually making monthly tuition payments. The bulk had already paid their tuition in full.

And because of that, he almost lost his school.

Should You Ever Take Cash Up Front?

Having said that, I’ll say that it doesn’t hurt to take cash up front every now and then. That is, so long as you save it in an interest bearing account until the end of the tax year, only taking it as profit when your taxes and all your other expenses have been paid.

I suggest you take no more than 20 percent of your new memberships and renewals as cash outs, to ensure steady cash flow year-round in your school. But for the majority of your income, I think it’s a much wiser choice to write the bulk of your memberships as monthly installment agreements, in order to ensure that you have reliable cash-flow every month.

And when you see an ad with Master So-and-so promising to show you how to increase your revenues from $10,000 to $40,000 in just one month… just do what I do and throw that rag in the circular file.