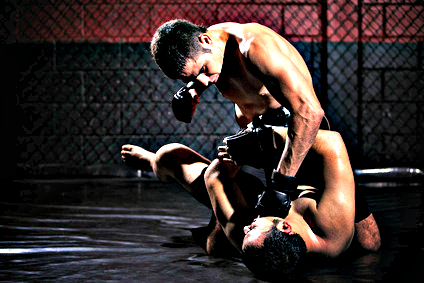 Recently I was hanging out with a former student who now runs a school. We were discussing how his studio was going, and I mentioned he must be doing pretty well.

At this, I cocked an eyebrow and said, “Go on…”

“Well, we’d be doing a lot better if my wife didn’t cut deals with everyone.”

Could This Be Why You’re Still Broke?

You see, this is a common reason why martial art schools fail to become profitable. And you might think that school owners “cut deals” because they’re all big-hearted and soft in the center, like a teddy bear…

But you’d be wrong. Nope.

Instead, school owners cut deals with students because the discount is the first, last, and only resort for those who don’t know how to sell.

When you don’t have sufficient skill in selling, sales negotiations become nothing more than an inevitable path down the road to literally selling yourself short.

In an effort to get paid, you let people haggle you down on your rates, because it’s the only tactic you have in your arsenal for convincing someone to enroll.

Now, don’t get me wrong – I use strategic discounts all the time in order to increase my conversions. But, the key word here is “strategic” – meaning, I control the when, where, and why of the discount.

How I Gave Up Giving In To Hagglers, For Good

Let me share a story with you about why I don’t let potential students haggle me down any more. Many years ago when I had first moved from a part-time location into my own dojo, I had a family come in to try our programs out.

Dad and son were going to take martial arts, and mom was going to take my fitness classes. “Gee, this is swell,” I thought. “Three students enrolling all at once.” (I was so naïve back then – I actually was already counting the money in my head, and I actually said words like “swell”.)

So when it comes time for them to enroll, dad shows up all alone. I thought nothing of it, but as it turns out, dad worked in sales for one of the huge international tech companies here in Austin.

And, he liked to haggle.

And he was good at it.

Long story short, a few minutes later I was watching him drive away in his brand new 7 series, wondering how I just got boondoggled into giving him 50% off my set tuition rates.

And that’s when I vowed I would never let someone haggle me down on price again. I began studying the art of the sale, and what I once thought was “dirty” and “beneath me” now became self-defense, of a sort…

…because once I knew how to sell, I was never at the mercy of a haggler ever again.

How Hagglers Get You Demoted In Pay

When you let someone haggle you down on price, two things happen:

And let me tell you, people talk. If you give one family a “special discount” they WILL tell all their friends about it. Why? Because people like to brag about the good deal they got.

And of course, all their friends will then know that you’re a sucker, and they’ll hold out for the exact same deal.

So, if you want to be an under-paid sucker, cut deals with people.

But if you want to be a highly-paid professional, get some serious training in how to sell memberships, so you can stick to your guns and get paid what you’re worth, every single time.

How To Learn “Haggling Self-Defense”

Knowing how to sell – and by extension, how to control the sales process – is the only self-defense against hagglers who want to steal your profits.

And that’s exactly what I teach you to do in my Phone-to-Enrollment Martial Art School Sales Success System.

Right now you can get the full training, including:

See that? I just used a strategic discount on you. Bet you didn’t see that coming, did you? :)

Seriously though, if you want to increase your pay this year, this is the best way to do it.

So, give yourself a pay raise this year, and grab my course today while it’s still on sale.