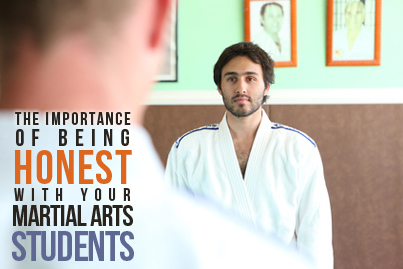 How important is it to be honest with your students?

If you listen to some martial arts business consultants, you’d assume the answer would be, “Not much.”

I mean, it seems to follow logically that if Master So-and-so built a school of 350 students with a monthly gross of $40,000+ by lying to and misleading their students, then honesty must not matter all that much.

And if you made that assumption, you’d be dead wrong.

Think Honesty Doesn’t Matter? Then Think On This…

That’s because there’s this thing known as buyer’s remorse.

“Buyer’s remorse” is when you make a purchase and afterward you regret that decision. It’s caused by a phenomenon called “cognitive dissonance” (more on that in a minute).

Now, here’s the thing about joining a martial art school…

If you’re a parent and you enroll your child in martial arts, the kid only knows what they experience in class. And, although the parent may feel like they’ve been had after getting hard-sold, deceived, and manipulated into enrolling their kid, they probably aren’t going to pull their kid out because they don’t want to disappoint them.

And then, they see the instructor teaching their kid about honesty and integrity – when they know the guy or gal just lied right to their face about the terms of their membership, or hidden costs, or whatever to get them enrolled.

That, my friend, is cognitive dissonance.

So, they’ll sit there smiling and nodding along with all the rest of the parents, but all the while they’re harboring this growing resentment toward the instructor or school owner who gave them the hard sell.

And it festers over time, until pretty soon you end up with a school full of difficult and edgy parents who go haywire on you at the drop of a hat…

…all because your approach to selling undermined your relationship with them from the very second they signed on the dotted line.

Eventually, We All Pay For Our Sins

You see, dishonesty has a nasty way of catching up with people. Some call it karma, others say it’s reaping what you sow. Whatever you call it, lying to your customers will come back and bite you in the rear, eventually.

This usually plays out in one of two ways…

In a small town, eventually word gets around that a ‘School Owner A’ uses slimy, hard-sell tactics to enroll students.

And, eventually someone else moves in (‘School Owner B’) who earns a reputation for honesty and integrity, and they steal market share from School A. School A limps along for years, and eventually shuts down because they never could quite recover from hacking off half the PTA with their dirty sales tricks.

In a large town it tends to play out differently. A shady school owner in a big city can and often does get away with using dishonest sales tactics, because they have a large enough pool to draw from that they can simply advertise heavily and get a fresh new batch of unsuspecting souls every few months.

And that’s how Master So-and-So can use those sneaky tricks and still be making money hand-over-fist. However, technology and the internet have changed this somewhat. The advent of online review sites (and Google business reviews) have made it nearly impossible to escape forever.

So, the negative reviews for the big town school continue to pile up, making it increasingly harder to attract new students. Sure, they can use sneaky tactics like changing their domain name every few years, hiring a reputation management company to post fake reviews, and telling Google and Yelp they’ve shut their doors…

But those tricks only work for so long. And eventually, what happens is the school owner gets tired of fighting an uphill battle. So they sell their studio, move to another town, and start all over again (and now you know why so many of them end up in South Florida).

Honesty Is So Much Easier, And You’ll Sleep Better, Too

Folks, it’s easy to succumb to the attraction of quick money. And, quite honestly you can definitely enroll a lot of students by lying to cover up all the things that give prospective students pause about enrolling in your classes.

However, I want you to know that there’s a much better way. And that way is telling the truth, and telling it in a such a way that the client knows for a fact you’re on their side. Man, I can’t tell you what a huge difference that makes in the relationship you have with your students.

Sure, there will always be people who are impossible to please, but when you sell with honesty you can rest easy knowing that you hold the moral high ground with difficult people. Plus, you’ll sleep better at night knowing that you’re helping your students achieve the best possible outcome – in the office and on the dojo floor.

Now, doesn’t that sound a whole lot better than being a lying fraud?