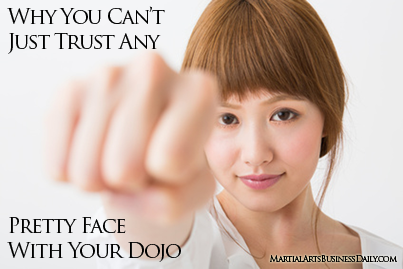 Or, Why I Don’t Whore My Name Out

True story… I was recently contacted with an interview request from someone who is writing a book on how to run a six-figure martial art school.

Now, I’m not one to jump at every opportunity to whore my name out in an effort to increase my public profile. So, instead of jumping at the opportunity to be in a book by someone I don’t know, I looked into the guy’s story a little further.

As it turns out, this guy has never run a martial art school. Ever. He’s an online marketing consultant who’s looking to break into doing consulting for martial arts schools.

But, the extent of his experience in running a martial art school is zero. The closest he’s come to starting and running a dojo is getting a first dan and interviewing a bunch of school owners. But, he’s writing a book on how to run a successful martial art school.

Granted, I checked out the guy’s websites and he’s obviously a skilled marketer… and that’s precisely the problem. He’ll interview a few big names, get by on borrowed credibility for a while, and then transition himself into being a “respected” martial arts business consultant.

And many of you will buy his stuff, never realizing that he has zero idea whether or not the stuff he’s teaching you actually works.

Which is exactly why I turned down the interview.

Martial Arts Business And The Theories Of “Experts”

It’s actually a very common practice among internet marketers to enter a new market niche on borrowed credibility. I’ve read more than one treatise on how to create information products (because I read that stuff for fun) that recommends interviewing experts and then turning those interviews into a book, audio, or video to sell.

In fact, several popular business books have followed more or less this exact same approach. Many of the best-selling business books that are on current “must read” lists are nothing more than research and reviews that have been regurgitated by a more or less talented writer.

So what’s wrong with this?

Simple – it’s the difference between theory and experience. When I mentioned the story above on Facebook, an instructor responded with the following quote:

“A man with experience is never at the mercy of a man with a theory.”

I believe the most popular version of that quote says, “A man with experience is never at the mercy of a man with an argument,” and I have yet to attribute it to a particular speaker… but it still rings true.

Experience trumps theory every single time. So why is it that some people seem to think that having a convincing theory makes them an expert on a topic about which they have zero experience?

I’ll tell you why – it’s about money, plain and simple. In business, it’s a given that there will be a certain number of people who will treat the opportunity for personal gain as a justification for just about anything (psychologists call these people “sociopaths”).

This is more commonly known as greed, and not only does it have a negative effect on our industry through the influence of experience-less experts, it also impacts our industry when the same attitude is adopted by martial art school owners themselves.

Many times, martial art school owners are influenced quite heavily by the advice of industry experts. Unfortunately, when said “experts” lack a certain moral compass to guide their own behaviours, their example can lead the easily-influenced astray.

A great example of this is in the proliferation of fake testimonials that currently populate the websites of many martial art schools. Many of you are doing this very thing right now, because you’ve purchased your martial arts school website from some third-party company who provided you with boilerplate sales copy as part of the package.

This boilerplate copy comes complete with testimonials from some people you’ve never even met, and photos of the same that are probably from some stock photography site. There’s no question that the sales pages work – otherwise, you wouldn’t have purchased them in the first place.

However, what is in question is the moral integrity of using fake testimonials on your websites – and also, the legality of the same.

Another variation on this theme is martial art schools who use paid actors to provide video testimonials for their websites and social media accounts. To me this is even worse from a moral perspective, because it’s the school owners themselves who are initiating the scam, and there’s absolutely no plausible deniability on their part (not that it would save you anyway, should the FTC come knocking on your virtual door about the veracity of your testimonials).

Regardless of the source though, this is all simply a symptom of a greater issue, and that is the absolutely failure or refusal by some people to examine the moral implications of their actions when and where large amounts of money are involved.

Buyer Beware When It Comes To Martial Arts Business Advice

The bottom line here is, you need to be sure that the people you’re taking advice from are actually:

a) Qualified to provide said advice, and
b) Not giving you advice that’s going to jeopardize your livelihood.

So, before you take someone at face value as an “expert” in the business of running a martial art school as a full-time profession, do some homework. See if they’re what they claim to be. Make sure you’re not being taken for a ride.

Where To Get Reliable Info

And, if you’re looking for a place where you’ll find reliable and proven information on how to start and run a profitable martial art school, taught by someone who has actually done it multiple times, check out MAbizU.com. It’s a new coaching site that I’ve set up to help school owners like you learn exactly what you need to know to succeed, in a logical, step-by-step manner.

But if you find yourself in a situation where you’ve taken some advice that wasn’t from a reliable source, don’t blame yourself. We’ve all been taken at least once in our lives. Simply do your best to repair the damage, and move on in the knowledge that you’re making it right, and that you’ll know better that next time around.