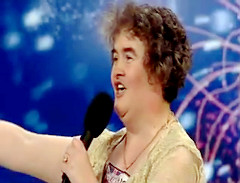 Susan Boyle is obviously not one to let the fear of failure stand in her way. ITV.com

This lady is freaking amazing.

So, what’s this got to do with starting a martial arts school?

In the book, Rhinoceros Success by Scott Alexander, the author talks about how being like a rhino can make you a success.

You think people in her home town laughed at her when she told them she was going to that audition?

Think she heard the tittering and catcalls in the crowd when she walked up on stage?

Think she saw the look of thinly veiled contempt on the judges’ faces during her introduction?

Think it bothered her?

But did it do a thing to dampen her performance?

You saw it and heard it – the proof is right there.

To my knowledge the lady’s not a black belt, but she has “success rhino” written all over her.

So, what’s stopping you? Fear of failure? Puh-leeze…

Life is full of potential disappointments. The question is, what do you want to say when you look back on your life?

“I never failed, because I never tried…”

“I gave it my all, and pursued my dreams – and for that alone, I’ve lived a full and rich life of no regrets.”

I know which one Susan Boyle chose.

Be a rhino starting today, and charge after your dreams.

Posted in Editorial, Start Up