(Note: In keeping with the recent theme of providing my blog readers with actionable ideas each week, I decided to update and post an article I had previously published at MAbizU.com. If you haven’t yet read it, I believe you’ll find the ideas here beneficial…)

Why You Should Sell Short-term Summer Memberships 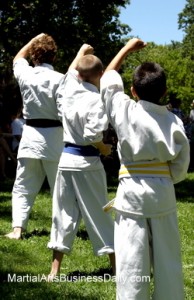 They’re going to be hanging out somewhere this summer… so it may as well be at your school!

I’m a huge advocate for selling a six-week short-term membership during the summer, since it brings in a lot of extra income during those notoriously slow summer months.

Now, I’ve heard some of the “experts” out there tell people not to run short-term summer specials because (they claim) you are losing long-term business by doing so.

So, short-term programs are really worth you time and effort. If you don’t offer one right now, by all means start offering one ASAP!

How to Get Your Short-term Members to Stick Around

After we implemented the short-term summer special, we discovered that we were losing a lot of the students we enrolled on 6-week specials because we didn’t have an upgrade process in place.

So, we started offering to fully credit the student’s initial payment toward a one-year enrollment, if and only if they enrolled on a regular 12-month membership before their six week period ended. This helped us upgrade a ton of what we thought would be “transient students” into regular members.

Using the 6-Week Special to Pre-Qualify Your Customers

By the way, you should price your six-week special at a price point equal to your base monthly rate.

Why? Because it conditions the new students to accept that dollar amount, and it also acts to qualify them at that price point. Then, when it’s time to enroll and they ask how much your monthly tuition is, there’s no sticker shock.

A Little Help top Get You Started

In case you’re interested, an example of the flier we use in our upgrade process is included in the members download archive at MAbizU.com. (And, although we already have some summer ads in the archive, we’ll have new ad templates for download later this month that you can use to advertise your summer classes.)

I recommend you give the upgrade flier to students as soon as they enroll on a six-week special, since they’re usually really pumped up about taking classes during their first week. It also helps to revisit this with students that haven’t upgraded during their fifth week in class – sometimes they change their mind and you can upgrade them right before they drop out.

Now that you understand the rationale and the process, all that’s left is to take action and do it!