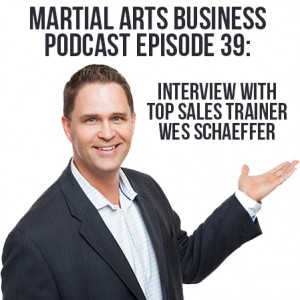 Wes Schaeffer – the man they call “The Sales Whisperer” – is an Air Force veteran, a graduate of the U.S. Air Force Academy, a father, author, coach, keynote speaker to Fortune 500 companies, and a heck of a funny guy.

He’s also the guy that sales organizations turn to when they need someone to coach their sales teams to the next level. And, like me he emphasizes integrity in his selling approach, which is why I’m delighted to have him as a guest on this episode of the Martial Arts Business Podcast.

In this interview, Wes shares wisdom on selling with integrity gained from a decades-long career as a top sales pro and trainer. If you’ve ever wondered what makes the difference between someone who sells things as part of their job, and someone who is a sales professional, you’ll want to listen in to this podcast.

And, in The Tip of the Week, Mike explains how to avoid losing your new students after the sale.

Resources Mentioned In This Podcast Episode:

Small Dojo Big Profits – Mike’s classic manual for starting and running a highly profitable small martial arts school.
MA Biz U – The online martial arts business coaching program that Bill credits with much of his school’s growth.
The Martial Arts Marketing Success System – This Mike’s newly revised and updated Martial Arts Marketing Success System, with 45 new pages added to the manual, two hours of new audio and video, and completely updated strategy and marketing plans for marketing your dojo both online and offline.
MAbizPlan.com – The site where you can get the martial arts business plan I wrote for free.
TheSalesWhisperer.com – Wes Schaeffer’s site – be sure to go check him out online!

Now, what do I have on tap for you today? Well, I have a very interesting interview with a man who is not a Martial Artist or school owner, but instead, a coach. A very specific coach. He is a business coach to sales people. Anyone who is in the sales industry that is selling something, whether they be a small business owner, or an entrepreneur, or a professional sales person. His name is Wes Schaeffer and they call him “The Sales Whisperer.”

The reason I brought Wes on the show was to talk about a theme that I have going on in the newsletter during this week and also over the past several days on sales and selling with integrity. Wes and I are talking about that in the interview that you’re going to hear on today’s podcast. Talking about why integrity is so important, what the most important things are for a person who is selling anything to know about selling, what are some of the common mistakes that are made, and so on.

Now, I think this is a really important podcast interview for you to listen to, simply for two reasons: #1, Wes has been a sales professional for most of his adult life. Well, he did exit the Air Force after serving in the Air Force honorably and then went into sales, so he spent some time in the military. He was able to transition from a military career straight into a sales career and also be very successful at it and have a very lucrative long standing career. The second reason why I think this is an important interview for you to listen to is because I know Wes to be a man of integrity.

Often I think that martial artists they operate under the false dichotomy that, either you are teaching martial arts and starving and not doing any of the business things that can make your school more successful and you’re, therefore, an honest person, or you’re not teaching good martial arts and you’re totally focused on profit and you’re a horrible person. Obviously a false dichotomy. It’s not an either / or thing. You can absolutely, positively be a good martial artist, and a good martial arts teacher, and also make a tidy profit through your school. You can also be an absolutely horrible teacher and be poor as well. I’m sure we’ve all seen people that fit both bills.

What I want you to understand is that learning how to sell and selling is so, so important to running a successful martial arts studio. One of the reasons why it’s so important is simply because you need to learn how to sell to maximize the amount of money that you’re spending on marketing, the amount of effort you’re putting into your marketing, and to maximize the number of leads that are coming into your school. We know that, especially going into this time of year that we’re entering, which is the holiday season at the time of this recording, that things like leads and inquiries tend to slow down. Now, if you know how to sell, you can maximize the amount of leads and inquiries that you get during the so-called slow seasons of the year and you can continue to enroll students even through the holidays simply because you’re good at selling. If you’re lousy at selling, then you’re going to struggle during these times and these so-called slow seasons of the year. You’re going to be wishing that time would speed up to where January would get here sooner than later, so you could start seeing that lead flow increase and so forth and you can start making easy enrollments.

Well, the thing is, every enrollment, for every lead, should be an easy enrollment if you know what to say and how to say it to the prospect during the entire process. From the time they contact you, either over the phone or via your website, to the time that they come in for their first appointment for an intro or, if you do school tours, for a school tour, to the time that your sit them down in the office and talk to them about membership options and so forth and take them through what is often called an enrollment conference. Then also after the sale, you need to know how to treat the customer, the client, after the sale. How to treat that student so that they feel as though they’re buying decision was a good buying decision and they don’t experience buyer’s remorse.

These are all skill that are encompassed in the realm of selling, knowing how to sell. There’s nothing dirty about selling. There’s nothing wrong with selling. I’ve known a lot of people that were in the sales industry that were absolutely people of integrity. Wes is one of them. He’s a very good coach and he has a lot to share in the podcast interview. I hope you’ll stick around for it.

Also, I just want to mention that if you’re not on the newsletter list, if you haven’t gone to the website, signed up for the freebies at MartialArtsBusinessDaily.com and joined the news letter list… Also, I have another site where I’m giving away a freebie that I’ve been promoting lately, that is MAbizPlan.com. If you go to MAbizPlan.com, you can get the actual martial arts business plan that I wrote, that I created, in order to get a $50,000 loan from an angel investor for my first school during a time of expansion. Now, this is the actual business plan that I used. It is not altered or modified, except to make it easier for you to read, and use, and understand. If you want to go there and sign up for the newsletter and get that freebie, you can. What I’m telling you is if you’re not on the newsletter list, you’re missing out on a lot of good information that’s coming out daily in that newsletter.

I’ve been writing extensive emails and email series on different topics related to various topics of interest that readers have expressed, that my newsletter subscribers have expressed, that they wanted to hear more about. I’m going to continue to do so over the course of the coming year. Probably all the way throughout 2016 I’ll continue writing these in depth email series on different topics related to running a martial arts school. If you’re not on the newsletter list, I’m telling you, you’re missing out on a lot of good information. Make sure you go to either MartialArtsBusinessDaily.com or MAbizPlan.com and sign up for the newsletter list immediately.

That’s all I have before we get into the interview with Wes Shaffer. Remember we’re going to have a very brief commercial message for you. This is how I support this podcast by selling you my stuff. What is my stuff? Business resources and so forth, information resource, etc, they can help you as a martial arts school owner, or an aspiring martial arts school owner, to become more successful in what you’re doing. I ask you to stay tuned and sit through this brief commercial message before we get to the podcast interview, because I know you’re going to enjoy it.

Thanks for sticking around. Remember, also, after the podcast we will have the Tip of the Week, so be sure to stick around for that, too.