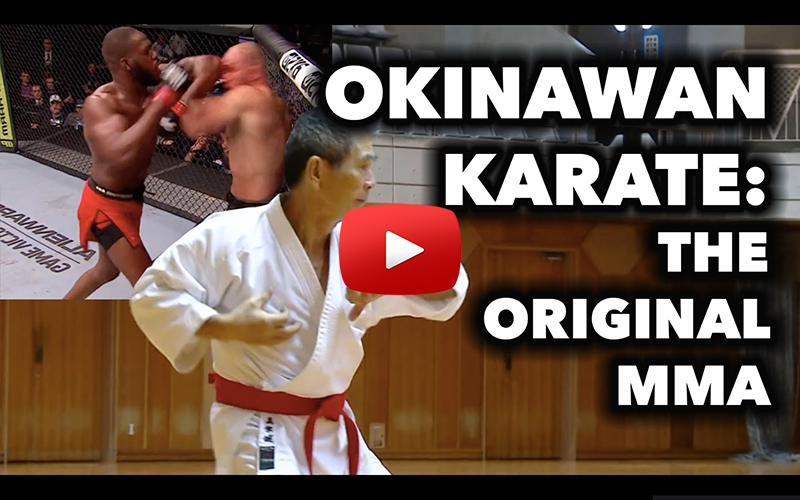 So lately there has been a lot of talk about traditional martial arts making a comeback in MMA. Of course, we’re all aware of how Lyoto Machida successfully adapted his Shotokan karate skills to the ring, and with great success.

And, now we’re seeing karate and tae kwon do black belts like Stephen Thompson, Sage Northcutt, and Michelle Waterson making their mark in the sport. Which, of course, is really cool and a lot of fun to watch.

But in light of all this, lately I’ve been seeing a few of these “X martial art in MMA” videos floating around.

As a study in martial dynamics and human movement, these videos are interesting to watch. But here’s where it’s getting weird…

Sure, I’ll admit that there are some similarities between traditional martial arts movements and those used in ring sports. And, it’s no secret that many martial arts styles teach similar techniques and movements.

However, if you’re a traditional martial arts instructor, posting one of these videos to your Facebook page and saying, “See? We teach this stuff too!” is morally no different than changing the sign on your storefront from “KARATE” or “TAE KWON DO” to “MMA” overnight.

Granted, as someone pointed out when I posted on Facebook about this, the mechanics in many techniques are similar from style to style. Fine. But where someone learned those mechanics definitely matters, at least from an honesty perspective.

I know, I know… right now some of you are saying, “But Lyoto Machida/Stephen Thompson/Sage Northcutt/Michelle Waterson uses traditional martial arts in the ring!”

Yeah, they do. But the difference between them and your average karate or tae kwon do instructor is that pro fighters with TMA backgrounds actively cross-train in combat sports. They’re training day-in and day-out with BJJ instructors, wrestling coaches, Judo black belts, Thai boxing krus, and boxing coaches.

And the fact is until you’ve stepped in the ring with a pro fighter and had your head taken off for three minutes of eternity, or until you’ve stepped on the mat with a BJJ black belt and found yourself helplessly being tapped like a typewriter, or until you’ve had an all-state wrestler take you down again, and again, and again, you have no idea what you’re talking about when you compare what you do in your karate or tae kwon do class with what pro MMA fighters do in the ring. None.

But besides the honesty factor, there are other reasons why you should stop comparing your TMA to MMA. The thing is, people come to train at a traditional martial arts school for entirely different reasons than they go to an MMA gym, and you serve a much different market.

If your students wanted MMA or BJJ, they’d go to an MMA gym or a BJJ school. But instead, they’re coming to you for what you offer, so be proud of that and stop trying to be something you’re not.

My advice is to just stick to what you know, and stop trying to be everything to everyone. Because if you try to be all things to all people, pretty soon you’ll end up being nothing to nobody and serving no one. And broke to boot.