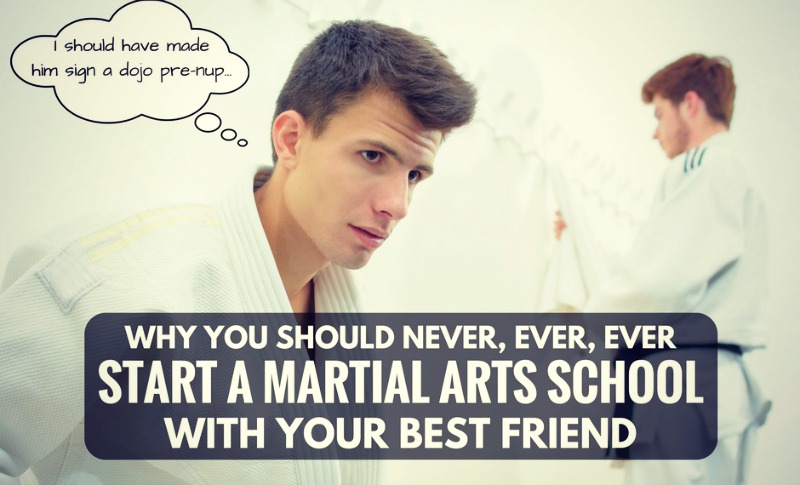 I come back around to this topic at least once a year. And despite my repeated warnings and admonishments to NOT start a martial art school with a partner, for some reason school owners still insist on doing it.

So, allow me to explain once again why partnerships and martial art schools don’t mix…

Every Business Partnership Is A Ticking Time Bomb

The first reason why you should avoid partnerships like the plague is because every business partnership is a ticking time bomb.

Now, I know when you think of a business partnership, you’re probably thinking of all the successful tech companies that were started by two or three guys. Hewlitt and Packard, Gates and Allen, Jobs and Woz.

Well, let me tell you the difference between what those guys did and what you’ll be doing when you start a dojo with your best bud. Those guys were basically in manufacturing, while you and your soon to be ex-pal are going to be in a service-based business.

Which means, after things got going and the honeymoon phase was over, Woz could get away from that egomaniac Jobs by busying himself elsewhere in the company. But you won’t have that luxury, because you’re going to be in close proximity with your business partner every single day.

Yep, conflict is inevitable in any relationship. That’s a fact. But in your pre-partnership friendship, you never spent that much time together… not like you will once you’re business partners.

In a business partnership, you’re stuck spending time with this person for hours and hours every day, and no matter how much you like each other eventually tensions will build.

Sure, Ben and Jerry made it work, but let’s face it—those guys were getting baked and eating ice cream 24/7. How could they not get along?

I remember what our counselor said during our premarital counseling. “Look at the person next to you. Now, imagine waking up next to them every day for the rest of your life. Are you sure you’re ready for that sort of commitment?”

(A tip for those of you contemplating marriage at the moment… before you answer that question, take a good look at your significant other’s mother or father. Because that’s what you’re going to be waking up next to in 20 years or so. I know, it’s a sobering thought. Enjoy your youth, kids.)

Well, being in a small business partnership is like being married, only without the benefit of make-up sex. You share everything, you spend way too much time together, you argue over piddly crap, and then you have absolutely no way to release all that tension… unless you start stepping into the ring every time you have a disagreement.

Now, if 50% of marriages fail, and those people actually get to “know” each other in the Biblical sense every so often, what makes you think your friendship is going to weather the stormy seas of that business partnership you’re contemplating?

The answer is, it probably won’t.

But Despite The Lack of “Intimate Relations,” In A Business Partnership One Person Always Gets Screwed

What many instructors don’t realize before they start a martial arts school, is that teaching classes is absolutely the easiest job in the dojo. Hands down, without question.

Why do I say that? Because for starters, it’s the only really fun job in the dojo. Heck, it’s the whole reason why you wanted to start a school in the first place.

Think about it—if your only job in the school is to teach classes, you’re golden. You get to show up, teach, have a freaking awesome time training and passing on your art… and then you get to go home.

And this is something that kills a lot of martial art schools every single year. People start dojos with unrealistic expectations. They think they’ll just be able to show up, teach, and go home, and still have a financially healthy business.

Well, think again. Someone has to do all the other stuff that makes a martial arts school a financially viable business. Things like:

…and a whole slew of other miscellaneous activities and responsibilities that will pop up on a daily basis when you’re running a small business.

This is why, when an instructor and a student partner up to start a dojo, the student ALWAYS gets screwed. The instructor says, “I’ll teach, you run the office, and we’ll split everything down the middle.”

Then, after the school is up and running the instructor ends up working 20 hours a week, and the poor student is working 40 to 60 hours a week. Suddenly, the student is wondering why they’re only getting half the money for twice the work.

And what’s even worse is that the balance of power in the relationship is heavily weighted toward the instructor or ranking black belt. Which makes it awfully awkward for the student to confront the instructor with their grievances.

The Surefire Way To Ruin A Perfectly Good Friendship

One thing I know is that people in a relationship act very different when money is involved. Oh, if you think I’m off base and that your best buddy is a saint who is completely divorced from worldly desires and base emotions like greed, just invite them to a friendly game of Monopoly.

I guarantee you, as soon as they start plunking houses down on Park Place you’ll see exactly what kind of a greedy little bastard they really are.

Which brings me to another point about people and personality types… most of us in the martial arts world, at least the ones who stick with it, are egotistically competitive. And if you know anything about alpha males and females, you can’t have two of them under the same roof for long without running into problems.

So, you want to know how to turn a perfectly functional friendship into a dysfunctional relationship that’s a living hell, and in record time? You guessed it… become business partners.

Quick-start Guide to My Books and Resources:
– Looking for a list of books and resources I’ve written? Click here!
– Starting a dojo? Wondering where to start? Click here…
– Looking for low-cost business coaching to grow your dojo? Click here…

P.S. – Sometimes, it works out. Not often, but every once in a blue moon. Still, the odds are stacked against you. I know, it sounds great to be able to split the heavy workload and initial investment necessary to start and grow a dojo with your best pal. But my advice is that if you value your friendship, don’t go into business with your friends. You have been warned…

Posted in Business Articles, Start Up