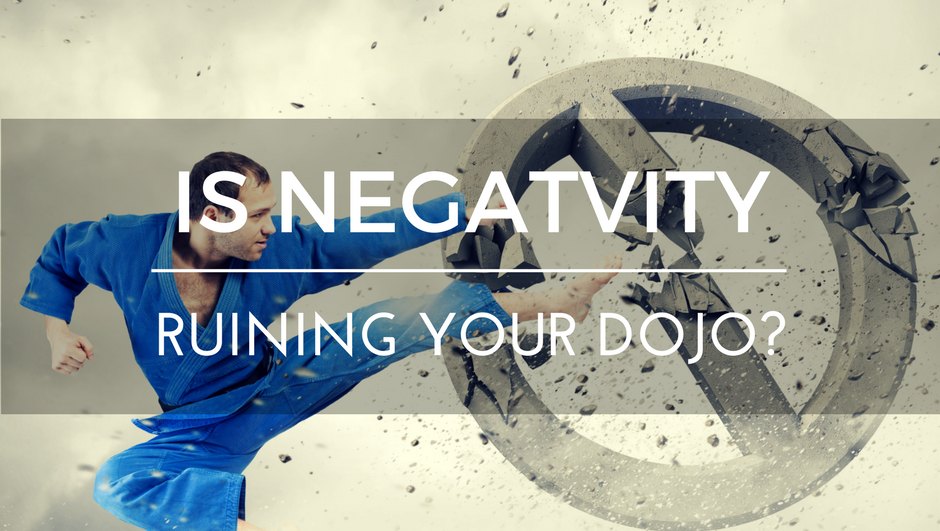 Holy crap, but people are so negative these days.

I’m a pragmatist by nature, and considered by many to be a bit of a curmudgeon as well. So when I say someone is being negative, you can be damned certain that yes, they’re being negative.

And let me tell you, negativity will absolutely ruin your dojo. Just off the top of my head, here are three examples of how being negative will hurt your business.

How Negativity Damages Your Public Image

Tell me, how many times have you seen a martial arts instructor’s Facebook book feed that looks like this:

You laugh, but only because you know someone like this and you see it daily. Or, you’re not laughing because you are this person, and you do it daily.

Folks, no one gives a circus monkey’s flying handful of feces what your political views are, and especially not at a time like this when everyone is flinging mud and crap.

And bitching every day on Facebook about how the world is about to implode because “politics” certainly doesn’t scream to the world that you’re an expert on teaching people how to be positive.

To the public, you’re either a political slacktivist, or a martial arts instructor who is focused on helping people achieve their very best. Which is it?

My advice to you is that you’d better decide, because each day you choose to show two faces to the world at large is another day you’re losing business to your competition. So, stop sending mixed messages to the public, and start focusing on your one purpose.

How Negativity Undermines Your Ability To Succeed

Look, I’m just going to come right out and say this without mincing any words.

Many martial arts instructors who fail in business are looking for excuses for their own failures.

And for that reason, you come across an awful lot of baseless, senseless crap in martial arts blogs, on martial arts forums, and in martial arts discussion groups on Facebook (most are what I call “blind lemming clubs”, but I digress).

All you have to do is gather up a bunch of these sites and groups and throw a digital dart, and you’ll hit someone whining and moaning about how hard times are right now for martial art school owners.

I think you get the point. But you want to know something? I just don’t see it. In fact, the folks in my coaching group who I interact with daily are enrolling students in record numbers.

Here are some actual quotes from members in my private coaching group:

And if you think it’s just because these school owners live in upscale areas where everyone wipes their backsides with $100 bills, think again.

Tuesday I interviewed one of my clients who runs a dojo in the second-poorest city in his state. In fact, the median annual income in his town is $15,000 a year.

And yet, he sold 77 paid trials over the Christmas holidays, and has seen over forty of those people come in since the New Year. Not only that, but he also had 60+ additional inquiries during that time!

Folks, if you’re struggling in you dojo, maybe it’s not the economy. Maybe it’s just that you’re not taking the right steps to help your business succeed.

Which brings me to my next point…

How Being Negative About Other People Undermines Your Success

If I got paid a nickel for every time I heard a martial arts instructor bad mouth a successful school owner, I’d never have to work again.

And if I got paid a dime every time I heard someone say, “I’ve heard that before” or “I know that already,” well…

Let’s just say I’d have a lot of dimes.

What you’re saying when you bad mouth a successful school owner is that you’re too proud to learn from that person. And when you say, “Yeah, but they do _______ wrong” or “Yeah, but their students are _______,” what you’re really doing is excusing your own failure.

And when someone who knows how to run a profitable school gives you advice, and you say “I know that already,” what you’re really saying is, “I’m too lazy to do the things I know I need to do to succeed.” Again, what you’re really doing is excusing your own failure.

Am I being too harsh? No, I’m simply telling the truth. Putting down people who are successful is just a coping mechanism for people who are too weak-minded and lazy to reach their own full potential.

When you participate in these discussions, what you’re really doing is making excuses for why you haven’t realized your dream of making the martial arts your full-time career.

So, stop it. Stop participating in negative discussions about people you’ve never met, and instead humble yourself so you can find out how they’re doing what you haven’t yet done.

A Few Final Thoughts On Negativity

The human mind is an incredible system, and it works in interesting ways. As it turns out, what we focus on is what we perceive in our environment. Therefore, we tend to get what we think about.

And this isn’t because of some flippy-dippy law of attraction. It’s simply how the mind works.

See, in any given moment your brain takes in too much information for your conscious mind to process. So, it filters out what it thinks of as unimportant, and it only shows your conscious mind select bits of info that are relevant to your specified priorities.

This is a survival mechanism, honed over many millennia before we became an industrialized, information based society. And it was necessary to allow us to survive all the dangers and hazards of pre-industrial life.

But now, that very survival mechanism can work against you if you’re not careful. Because whatever you program your brain to focus on, that’s what you’re going to notice in your environment.

And if you’re focused on all the bad things that are going on in the world, that’s what your brain is going to see.

Which is why you need to be very careful about what you’re reading, watching, thinking, and saying. Because if you’re not careful, you’ll program your brain to show you a very ugly, depressing world with no hope and no future.

This is despite the fact that the world keeps on turning, no matter which societies rise or fall, or who is currently in power in what nation, or what the price of oil or gold or pork bellies is at the moment.

Feed your brain like you feed your body. Garbage in, garbage out. Good stuff in, good stuff out.

Now, go read some Ziglar, listen to a Jocko podcast, and choose to be happy.