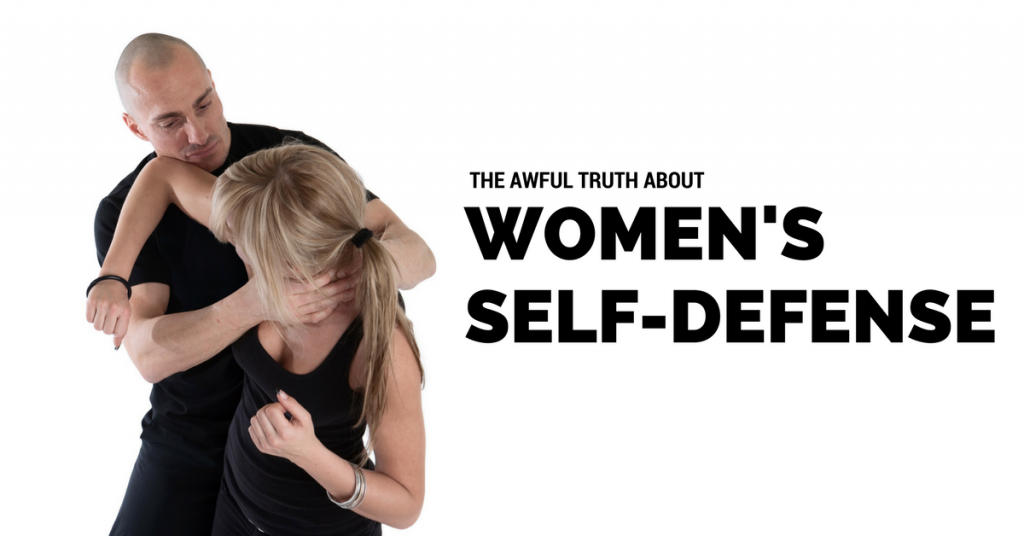 Ever ask yourself why there’s so many cringe-worthy videos online on the topic of women’s self-defense? If you’re not sure what I mean, here’s a prime example*:

Hard to watch? Kind of makes you embarrassed for martial arts instructors everywhere, doesn’t it?

The Culprit: The Expert Delusion

I can tell you that part of the problem stems from martial arts instructors suffering from “the expert delusion” — that’s when someone is an expert in one field, and they assume that makes them an expert in a related field.

You see this A LOT in the world of “tactical” self-defense training. Many firearms instructors think they can teach anything and everything, just because they attended a two-hour range course, or because they spent a few years working as a cook in the Marine Corp.

This is also why you’ll see cops teaching women’s self-defense classes, where they give really bad advice… things like “use your keys as a weapon” (you won’t have time to stick your keys between your fingers), or “urinate on yourself” (might actually be a turn-on to a sadist), or “tell the rapist you have AIDS (they might already have it… and besides, most rapists use condoms because they watch TV too).

Likewise, many martial arts instructors think they are experts at self-defense, just because they’ve earned a black belt. Not true. So not true.

I learned this the hard way, the first time I taught a women’s self-defense course. A friend and I taught it at a local community college… I think I was 22 at the time. Only two women showed up. Both had been assaulted, and both of them asked questions that we were totally unprepared to answer.

Our class was a huge flop. My friend resolved to never teach a women’s self-defense course again. I decided instead to learn everything I could about the topic, and spent two decades studying various approaches to teaching women self-defense, pouring over crime statistics, and trying to examine self-defense from a woman’s perspective.

Along the way I taught self-defense classes to hundreds of women, and lectured twice yearly on the topic at our local university (I taught a class for the kinesiology department, and the department chair asked me to include it in my course syllabus as a class requirement for all my students). And, I spoke to dozens of young women who had been assaulted.

The things I learned during that time would have a tremendous impact on how I eventually approached women’s self-defense training. Since I get asked about this a lot by my clients, I decided to share a few tips today, in hopes that I can prevent many of you from teaching cringe-worthy women’s self-defense courses.

Of course not! So, get yourself out of the mindset that you are teaching different self-defense methods for women than you are for men.

Certainly, there are differences in bone structure, musculature, and so on between the sexes in most cases. But, if the recent rise of women’s MMA has taught us anything, it’s that women can learn to fight just as well as men can.

So, ditch the sexist attitude and teach your female students like warriors, not women. Everyone bleeds the same on the battlefield, so train them just like you would anyone else. Equal, and with an equally serious mindset.

Lesson #2 – Something Is Better Than Nothing…

At every opportunity I try to on-ramp the ladies who attend my self-defense courses for women into my regular classes. The reason is not just because I want to enroll more students, it’s also because I know that the more training they get, the better.

However, I still teach short courses on self-defense for women. My reasons for this are simple:

If you want a prime example of reason #2, take a look at the story of Kelly Herron. Kelly was out for a jog and got attacked by a serial rapist. She’d taken a self-defense course just three days prior, and was able to successfully fend off her attacker.

With just a tiny bit of training and a hell of a lot of attitude, she was able to successfully defend herself. And, she even locked the guy in the bathroom until the cops arrived (with some help from bystanders).

Which brings me to lesson #3, that mindset trumps technique. First, show a woman a few simple techniques and tactics, like how to throw a strike with her whole body behind it, how to attack soft target areas like the eyes, throat, and groin, and how to fight to her feet from the ground…

…and then, tell her that her attacker is going to rape and kill her child after he’s done with her. I can guaran-effing-tee you, she’s going to fight like a hellcat and beat the shit out of her attacker, or die trying.

And that’s the most important lesson you can learn as a self-defense instructor to women, and that you can teach your female students. That is, to fight with everything they have to their very last breath to escape.

Now, I won’t ever tell my students they should fight in every scenario, because I don’t know what they’ll face. And, it’s a personal decision for each individual to choose to fight and possibly die or comply and survive. I won’t make that decision for my students.

But, I will try to help them develop the mentality that they will fight to their last breath. Because that’s what’s going to get them home, more than anything else I can teach them.

A few other things you should note if you’re thinking of teaching self-defense classes to and for women. First, much of your art is shit when it comes to self-defense. This comes from someone who holds dan ranks in two styles of karate, in tae kwon do, and in hapkido, plus instructor ranks in a couple of other arts.

And, I can tell you that 90% of what I learned in getting those ranks is absolute crap for self-defense.

If that rankles your ego, then you have no business teaching self-defense to anyone. Because face it — if you teach something useless to a student, and they have to rely on it to save their lives tomorrow, they are going to die.

That’s a hell of a thing to let your ego decide.

So, throw the “art” side of your training out the window, and stick with the basic stuff. Gross motor movements. Basic power generation. Strikes to soft targets. Forward aggression. And leave the crazy stances, the complicated hand movements and footwork, and the forms/animal moves/philosophy out of it.

Also, don’t reinvent the wheel. Instead, go to the people who have already figured this stuff out to improve your skills. Find a real Israeli krav maga instructor, and learn from them. Study Tony Blauer’s stuff or attend one of his courses. Get certified to teach a course like Gracie Women Empowered or Defend University’s programs. Look into adrenal stress response training. Teach what has been proven to work.

If you do these things, chances are good that next week or next month or next year, you’ll have a student contact you to say thanks, because what you taught them helped them survive a sexual assault.

Or, you could stick to what you’ve always done, and get someone hurt or killed. Your call.

Quick-start Guide to My Books and Resources:
– Looking for a list of books and resources I’ve written? Click here!
– Starting a dojo? Wondering where to start? Click here…
– Need business coaching to grow your dojo? Click here…

P.S. – * Like that karate rap video, this video will haunt the instructors who made it till the end of time. The moral of the story is, be careful what you put on video, because the internet is forever.

P.S.S. – ** If you immediately pictured a course that consisted of nothing but defenses against attacks to the groin, you are not alone.