“You can’t have a better tomorrow if you are thinking about yesterday all the time.” – Charles F. Kettering

Stuck In The 90’s, Longing For The 80’s… That’s Where Most Of Your Competition Lives 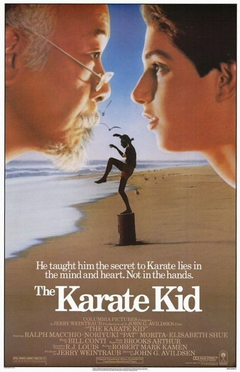 Who would have thought this movie would usher in the golden age of martial arts business?

I actually started my journey in the martial arts in the early 80’s. 1984 was the year The Karate Kid was released in theaters, and when Lee Van Cleef and Sho Kosugi were running around in black pajamas in the T.V. series The Master.

Back then you could swing a dead cat and hit someone who wanted to take traditional martial arts classes.

Every kid wanted to be either a ninja or washing cars for a karate master. The economy had shown a strong upsurge after recession, the dollar was strong, unemployment was down, and incomes were rising. It was the “golden age” of the martial arts business industry.

Fast forward to the late 90’s… this internet thing is really taking off! Venture capitalists were throwing money at dot coms like cheap rice at a wedding. Although other parts of the world were suffering through stagnant economic growth, the U.S. economy was booming. High-paying jobs were plentiful, credit was easy to get, and the dollar was strong…  a trend that would last well into the new millennium.

But alas, the good old days are long gone. Too bad most of the industry hasn’t figured that out yet.

One thing people in the industry have failed to notice is that not only has the economy changed – the way we find and attract new students has changed as well. In fact, it’s changed dramatically…

For big business, the era of making big bucks selling average products through massive advertising budgets has ended. Why? They can no longer use television advertisement to monopolize the public’s attention like they could in previous decades.

For smaller local businesses like martial arts studios, this has resulted in a slightly different fallout. We’ve never been able to take advantage of mass media to market our schools – so the way we reached the majority of our local market was through using:

Now, tell me – where’s your copy of the local phone book? Can you remember the last time it was even delivered to your doorstep?

And how many people do you know who actually read – I mean really read – the newspaper? Why pay $1.50 when I can get the news for free on Yahoo or Google?

Face it – the good old days of reaching 80 – 90% of your local market using phone book and print ads are long, long gone…

And the following stats reveal EXACTLY where those eyeballs have gone:

Percentage of U.S. households with an internet connection:

And, 97% of people with online access will research products and services online before they purchase –

Note: These are buyers, the people with money – in other words, our market.

So, when nearly 100% of educated shoppers research online before they buy a product or service – where do you think you need to be advertising?

The reason is that there is still a huge technology gap in online marketing for small business owners. While large corporations can hire a whole staff of web designers and search engine specialists to handle their online marketing for them – we obviously have not been able to afford that luxury.

How You Can Quickly Get Over The Online Marketing Technology Gap

In fact, for less than the cost of a single cheap newspaper ad, you can now run an ongoing local online marketing campaign that is:

(By the way, this is the EXACT same multi-pronged online marketing approach I used to turn my school around after the summer of 2007 when the recession first hit everyone really bad.)

If you are already convinced this is something you need to do for your school, visit http://MAbizU.com and enroll, then start going through the basic level marketing courses and work your way up to the more advanced material.

When you do, you’ll learn my multi-pronged approach for integrating new-school internet marketing with old-school martial art school marketing methods that still work like gangbusters.