“The person who says it cannot be done should not interrupt the person doing it.” – Chinese proverb

Sometimes You Swing And Miss, And Other Times, You Hit It Out Of The Park…

That’s just the way that it goes. That’s why I’m completely okay with trying idea after idea after idea, because eventually I know something is going to work out. I know eventually one of my ideas will “hit” and all the work will be worth it.

It’s not that I don’t get discouraged when I spend hours, days, weeks, and months on end working on a project that doesn’t pan out.

It’s just that I’ve learned how emotionally draining and practicably pointless dwelling on past failures is to a person. And as I get older, I find that not only is it senseless to dwell on negative experiences; I simply don’t have the energy to waste on it anymore. 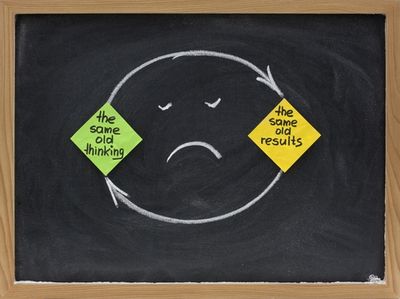 Of course, I wasn’t always like this… but once I recognized the harmful patterns I was pursuing in my thought process, I was able to stop them and replace them with new, more positive and effective coping processes.

For example, you may have managed your schedule or marketed your school a certain way in the past. And, it may have worked flawlessly in years gone by…

But, since that time your students and your environment may have changed such that, without replacing the old system with a new process, it will critically fail.

There’s no one to blame for this (blaming is a useless exercise at any rate); in fact, spending time trying to find a person or circumstance to blame only delays finding a solution.

This is such a powerful concept, folks like Zig Ziglar, Les Brown, Brian Tracy, and Jim Rohn have made their careers on sharing it with others.

And if you think about it, it’s an idea that is central to the practice of martial arts.

The things martial artists do are often counter-intuitive; punching through wood and concrete, “stepping into” punches, diving in the air to roll out of a throw, extending your arms and slapping the ground instead of putting an arm out to stop a fall…

None of it makes sense – until you see it done. Most often, it’s the act of witnessing (or, if you’re a little crazy like I used to be, of taking your instructor blindly at their word) that allows you to change your paradigm.

And, the result is you include that outcome in your reality of what is not only possible, but also in what is likely to occur should a particular action be taken.

Oh sure, you might eat a few punches, take a few hard bumps, and skin your knuckles a time or two learning to get it right…

But eventually, after experiencing the desired outcome over and over, it replaces the old belief in failure as an expected outcome.

The Most Ignored Critical Success Factor… Dogged Determination To Succeed

That’s the central point of this entire discussion… that only by driving through failure do you get to experience success.

And, only by experiencing success does your belief in success as an outcome become your reality.

So, allow yourself room to fail, and you’ll experience success like you never have before.