He Who Procrastinates, Will Regret It Later… 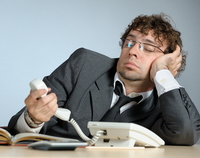 “I have plenty of time.”

Ever catch yourself saying these things?

Ever catch yourself doing these things?

Don’t expect any sympathy from me… because I’ve heard all the excuses:

Harsh? Not in the least.

You see, procrastination is a lot more insidious than we typically think. The reason is that it becomes a habit, a pattern, a way to cop out when we’re faced with things we don’t want to do.

Not only that… it’s self-destructive as well.

Your Procrastination Gives Your Competition More Time To Hose You

Guess what? When you procrastinate, you’re playing defense for the other team…

And in some cases, clearing the field so the other team can score…

All by being a big, fat, lazy procrastinator.

Yeah, you heard me…

Because if you think about it, procrastination is nothing more than when we allow ourselves to justify our own laziness.

One of my all-time favorite success sayings is from Brian Tracy, and it’s dead-simple:

Anytime I want to put off something until tomorrow, I can hear Brian’s words in my head.

And then, my internal drill instructor kicks in, I kick my butt in gear, and I get the task at hand done.

Why is this so important?

Because, you have NO idea what the competition is planning!

One instance of hesitation, and BAM! They get the jump on you.

Now, you could argue that the more talented martial artist “deserves” to be successful more than the other school owner. I mean, being as he or she is a better martial artist, has more experience, their students do well in competition… I could go on and on.

But from a business perspective, many times it’s the guy who runs the belt factory down the street who deserves it more…

Why? Because he’s doing the work required to get new students!

It’s the way the universe works… and it’s a universal law that’s repeated over and over again in Scripture. “You reap what you sow.” “Observe the ant…” “…the work of a man’s hand comes back to him.” I could go on and on.

Of course, everyone wants to blame someone else, right?

But the thing is (and this is what I tell my friends and clients) the buck stops with you!

It’s YOUR SCHOOL, YOUR TAIL on the LINE, and YOUR SUCCESS or FAILURE at STAKE!

If you do the work at the opportune time, you get the reward for doing so.

Some folks are going to look at MAbizU.com or Small Dojo Big Profits and go, “Yeah, that looks cool – but I’m going to wait and let someone else take the risk of trying it first…”

Well, let me tell you something –

By the time you do that, your competitor down the street may have already locked in your town…

And by then it will be too late.