GROW YOUR DOJO WITH THESE FREE BOOKS!

Why would I give away two free books? Because I'm hoping you'll read the rest of the series!

If you're a struggling dojo owner or thinking of opening a studio, here's why you need to read these books:

Find out how to get more new students 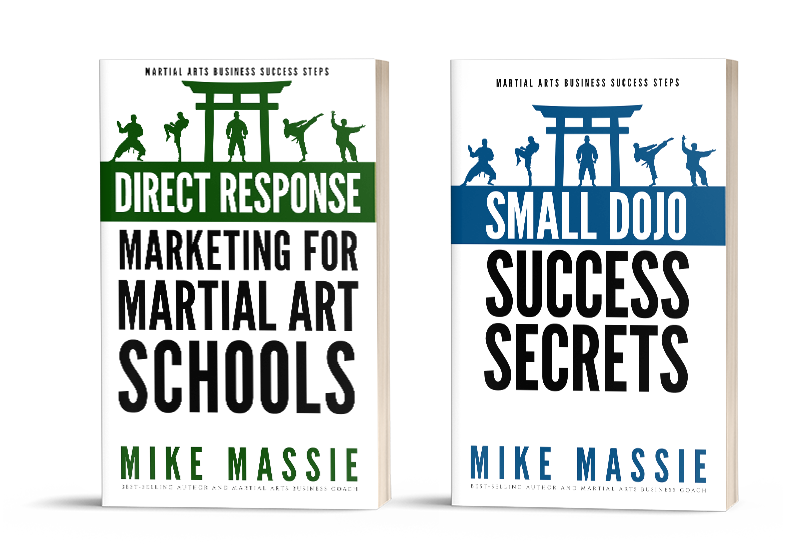 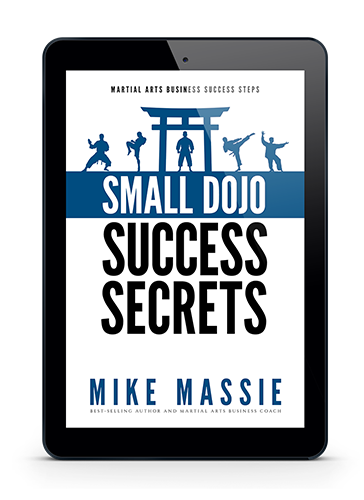 "I love the way Mike tells us how to run a dojo. He doesn't fill his content with fluff and every chapter is full of great nuggets. I highly recommend any of the books that Mike Massie puts out!" ~Brad, Amazon Reviewer

"The information found in this book is what turned my school around! I went from barely making it in my part time school, to now running my school full time. I live in one of the lowest income areas in the nation, other martial arts business consultants told me I could not make it here. But with the information in this and other books by Mike Massie, I am now able to do what many others told me I couldn't. Thank you Mike!" ~Brian, Amazon Reviewer 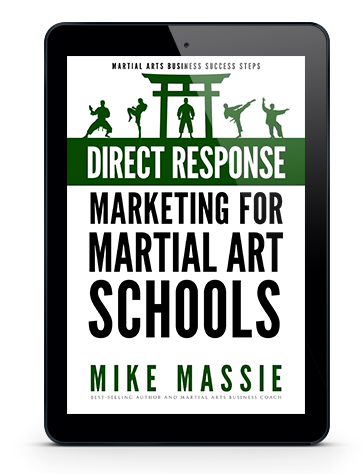 WHAT YOU'LL KNOW AFTER READING THESE BOOKS

Why Do Dojos Fail?

It's a good question, and one that many martial arts business consultants can't answer. Find out why some studios take off like a rocket, while others flop... and avoid those mistakes.

This one thing will sabotage your efforts to grow your school, and most studio owners miss it until it's too late. But once you understand it, it'll be easy to avoid, and your chances of success will increase dramatically.

Getting a grip on overhead and expenses is the first step to building a successful dojo. This section will help you understand the way overhead impacts your business, so you can prepare for success from day one.

Sophocles said no enemy is worse than bad advice, and that goes doubly so for school owners. Find out how to discern good advice from bad, so you can avoid being led down the path to self-destruction.

How to Choose a Location

Location matters, and anyone who tells you different is either a fool or a liar. However, it doesn't matter in the way most instructors think. Learn to recognize how your location impacts the success of your business so you can choose a location wisely.

Some say you have to operate in gray areas to get ahead. I call bull$hit on that claim. Find out how you can get ahead of your competition with honesty and integrity in this section.

Everything in these two books is based on real-world experience running martial art studios. Stop relying on advice from "experts" who have never started or run a dojo. Now you can get advice directly from someone who has been there and done it, multiple times.

Like the Amazon reviewer says in the quote above, these books pull no punches. I take great pride in the fact that I don't take sponsorships from large corporations, meaning I can call it as I see it. So, you're getting my unfiltered opinions and advice in these books.

Unlike other martial arts business guides, these books have zero fluff. My goal in writing these books was to give you essential information that you can use now. That's why these books are concise, straight to the point, and packed with useful information from cover to cover. 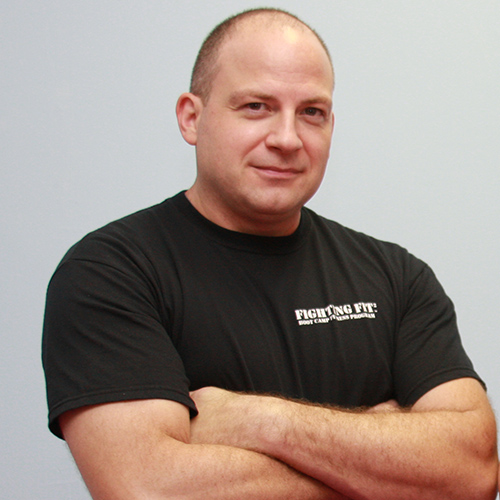 Mike Massie has spent the better part of his life learning and teaching martial arts. He started training in Shotokan karate and Chang Moo Kwan tae kwon do as a young teen, and later moved on to study hapkido, Jeet Kune Do, Filipino martial arts, MMA, Krav Maga, and Brazilian jiu-jitsu over a nearly four decade career in the martial arts.

Mr. Massie currently lives in Austin, Texas with his family, where he writes and coaches martial art school owners in how to grow successful, profitable dojos.

Click the button below to get your e-books delivered to your inbox now.