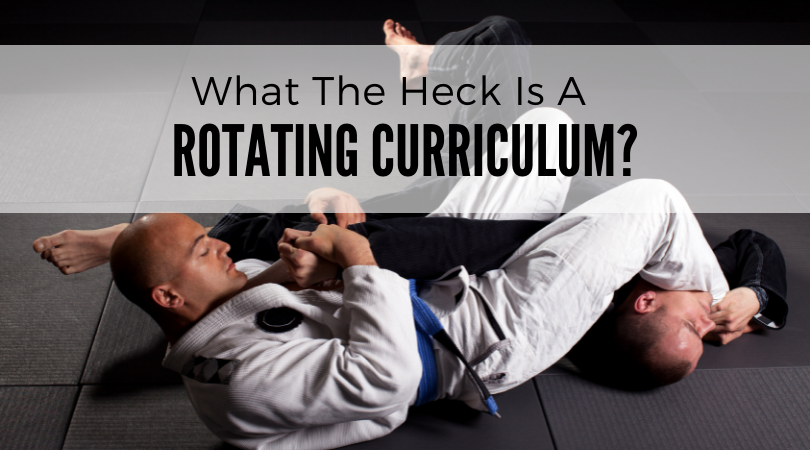 The Rotating Curriculum: A Tried And True Method For Teaching Large Groups And Multiple Ranks

When I started my first martial arts school, I had no idea what I was getting into. For starters, I’d never taught a class larger than eight or ten students.

So, when my classes swelled and my enrollment grew, and when I suddenly found myself teaching groups of 20-25 kids at a time, I knew I had to figure out a better way to organize and deliver my curriculum.

The problem was not so much that I couldn’t handle teaching 25 kids at a time. In fact, I was fine with it for the first year or so. Then, I started promoting students, and that’s where my success started to become a challenge.

See, it’s relatively easy and simple to teach an entire group of students the same martial arts curriculum all at once. However, when you have to teach one-fourth of your class one form, another quarter of the class another form, and the other half of the class a third form, and you only have 45 minutes… life quickly becomes very complicated.

The First Solution I Came Up With… Not So Much

At first, I did what all instructors do. And that is, I divided my curriculum up by level of difficulty and belt rank, and then I started breaking my classroom into smaller groups, assigning a class leader or assistant to lead each group while I floated from group to group to work with each.

What a nightmare! For starters, this meant you had to have three or four assistants helping you out in every class. Obviously if you had that many assistants on staff this could easily become a payroll disaster. So, the alternative is to have your students “teaching” for you, even if only for brief periods at a time.

This was probably exactly the way you were taught, as was I. However, I never really thought it was a very efficient way of teaching classes. Not only that, but if you have a bunch of “volunteers” helping you out, what happens when they “de-volunteer” themselves? I mean, you can’t really force your student to work for you for free (unless you’re running your school as a cult, but that’s another discussion entirely).

The end result of this was that the middle of every class was a nightmare that I dreaded. The beginning and end of classes were great, because I could teach the entire class the same thing (warm-ups, basics, pad combinations, etc.) at the same time. But the middle… that’s when I’d have to break the class up to work on forms and self-defense in separate groups. So, I’d have to run back and forth between groups, splitting my focus, and ultimately only giving each student just a few seconds of face time and direct instruction.

I knew I had to come up with a better way to do things and fast, otherwise I was going to end up losing some students.

Soon after this I started hearing about this thing called a martial arts rotating curriculum. In fact, I first heard about it from a well-known industry consultant who owned the billing company we used at the time. I initially discounted the idea out of hand, based mostly on the rapidly growing disillusionment with billing and consultation companies I was experiencing at the time…

However, I soon returned to the idea and started looking at how different schools were using the concept. Now for those of you who don’t know, a rotating curriculum is a way to arrange your martial arts curriculum such that you are able to teach an entire class of varying belt ranks the same material at the same time. Intrigued by the idea, I looked at several ways the concept was being applied, but frankly I didn’t like any of them.

But, I still liked the idea immensely and knew it would make my life easier by many degrees if I could find a way to make it work in my school. Of course, the big question I had was maintaining program quality; so, I had to find a way to use it that would allow me to keep my program quality high. Also, I had questions about testing and ranking that had to be addressed; specifically, what do you test your students over when they’re doing the same material, but testing for different ranks?

With these issues in mind, I sat down and devised an approach to applying the concept of using a rotating curriculum that fit my needs and my school. It took me several weeks to work it all out on paper, but when it was complete I was excited to put it into use. I decided to implement it at the start of the new year, so on January 1st (or the first class day after) I introduced it in my classes.

The end result was that it was a huge hit. Suddenly, my classes ran smoothly and I was able to get a lot more done in each class. Before implementing the rotating curriculum concept, my classes had looked very disorganized which at times made me look disorganized to the parents of my students. However, after implementing a rotating curriculum my classes were running with a military-like precision, making me look more like the very capable and experienced teacher that I actually was.

The best part was that I actually saw a net increase in the quality of my students, as well as an improvement in their retention of new material. Were there some hiccups along the way? Sure, but they were relatively minor. Overall, using a rotating curriculum in my martial arts school was a huge success, and it did in fact make my life much easier and made my job a lot more enjoyable as well.

Here’s How I Did It 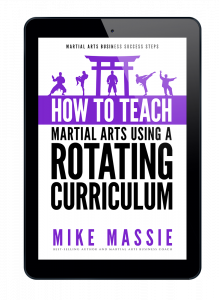 If you’re wondering how I did it, then I’m not going to keep you on the hook any longer. As I mentioned in a previous post, one of my goals for the coming year is to catalog and disseminate all the business and teaching systems I’ve developed over the last two decades in my own schools.

So if you’re wanting to find out how exactly I implemented the rotating curriculum concept in my own studios, you’ll be happy to know that I’ve put together a short yet informative manual called How To Teach Martial Arts Using A Rotating Curriculum In Your Karate School: Secrets to Teaching Multiple Ranks and Large Classes Efficiently With Minimal Staff

And, it’s only $3.99 in my bookstore on this site. Coming in at roughly 50 book-length pages, it’s a quick read but it will give you everything you need to know so you can create your own rotating curriculum for your school.

One more thing… I know that sometimes when a book is priced low, people think it’s not worth much. So do me favor if you read it, and leave a review over at Amazon to recommend it so other instructors will know it’s worth the chicken scratch that I’m asking for it. :)